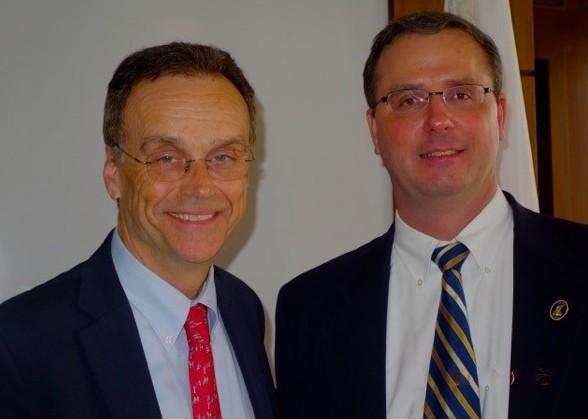 West Point, NY— On May 1 Andrew Nagorski, a renowned author and journalist, and a former foreign correspondent and editor for Newsweek, gave an engaging presentation on Jan Karski at the United States Military Academy (USMA) at West Point, NY, at the 2015 Annual Kosciuszko Conference “For Your Freedom and Ours: Poland and Poles during World War II”, organized by the American Association of the Friends of Kosciuszko at West Point, Inc. This year's conference commemorated the end of World War II and was devoted to the discussion on Poland's experience during the WWII and it contribution to the Allied efforts.

Mr. Nagorski, representing the Jan Karski Educational Foundation, discussed the highlights of Karski’s wartime record, and described how he interviewed him in 1998 for Newsweek's "Voices of the Century" project, a collection of interviews with a select group of people who had a huge impact in the 20th century that was then drawing to a close.

"On the walls of his modest apartment in Chevy Chase, Maryland, there were decorations and honors from the Poles, the Israelis and various Jewish organizations,” recalled Nagorski. “While surrounded by those tributes, in no way did he come across as someone who was anything but modest about his role. He did not in any way embellish the drama of his story. He did not have to. The facts speak for themselves. Just like he did in his remarkable book The Story of A Secret State, he in fact underplayed the dangers he constantly faced, almost making light of them. His courage was extraordinary. He struck me as a man of incredible dignity and strength. At one point I asked him 'Didn't you feel fear during all of this?' His answer was, in effect, 'It was war. It was normal.' His one clear regret: so many top Western leaders did not believe him."

Please follow the link to see the full list of the distinguished panelists, who participated in the conference.

Celebrations of the Kosciuszko Day on May 2 included a Memorial Mass in the Catholic Chapel of the Most Holy Trinity, a Cadet Parade, a Memorial Ceremony at the Kosciuszko Monument, and a luncheon. The conference and the celebrations were sponsored by the American Association of the Friends of Kosciuszko at West Point, Inc. in collaboration with the Military Academy's Annual Kosciuszko Memorial Observance.

The Jan Karski Educational Foundation wishes to express sincere thanks and appreciation to Andrew Nagorski for representing the Foundation and to Colonel Stephen Olejasz (US Army, Retired) for organizing this wonderful event, as well as for supporting the mission of promoting the Karski legacy.

Related pictures: "It was war. It was normal."