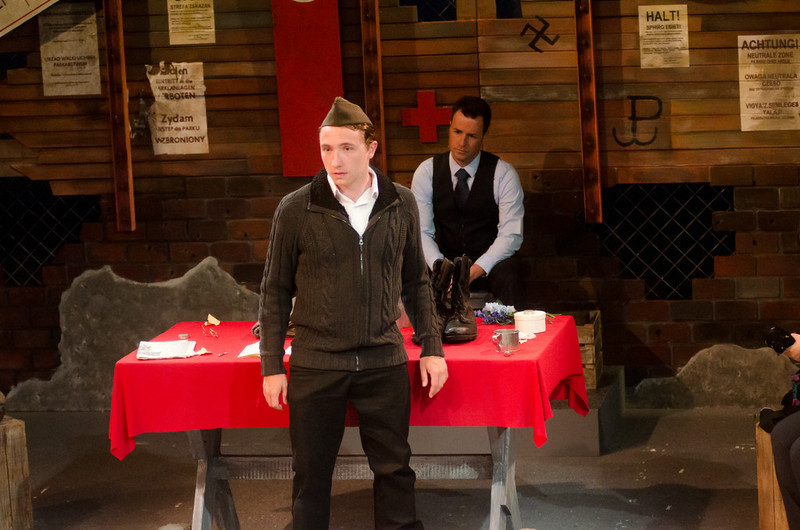 Coming to See Aunt Sophie, an original new production dramatizing Jan Karski's historical mission during World War II along with his lifelong agony over his perceived failure to compel the Allies to intervene on behalf of the doomed Jews of occupied Poland, finished a three-week run at Indiana State University's Crossroads Repertory Theatre on July 22.

A cast of seven actors -- five men and two women -- played a total of 50 roles by tricking out headdresses, scarves, accents and postures in scenes spanning six decades of the late Karski's life from his childhood in Lodz to his later years in Washington DC. Playwright Arthur Feinsod employed the device of a dialogue between the Old Karski, convincingly played by Brad Venable, and the Young Karski (Andrew Behling) to tell the story and to inject a dialectical exchange into his complicated narrative and history.

Additionally, Feinsod includes a character loosely based on French documentary filmmaker Claude Lanzmann (who famously interviewed Karski for his film Shoah in 1978) as one of the many characters coming from the ensemble. The Old Karski reluctantly grants an interview to the man he refers to as “Mr. Filmmaker,” much to the chagrin of his volatile wife Pola Nirenska Karski.

Behling stole the show in his portrayal of the Young Karski, showing a physicality and emotional intensity that transformed him from brilliant and idealistic young man to agonized actor pitting the strength of his will against the forces of inaction as demonstrated by Supreme Court Justice Felix Frankfurter's inability to believe Karski's report and President Franklin Roosevelt's from-on-high political grand-standing.

The Indiana audience was mesmerized by what they saw on stage, with many present having never heard of Karski or of the Polish Underground's significant and heroic efforts on behalf of the Allies during the war. Indiana University professor Dale McFadden directed the production.

"It was stunning," said Beth Tevlin, executive director of the Wabash Community Foundation, after the performance. "You were totally transported by the characters." Former social studies teacher and school board member Jackie Lower was inspired by the lessons Karski's life story can offer students in ethics, character education and social responsibility.

Plans are now in the works to bring the production to Chicago and elsewhere in the US. The play has already returned from a celebrated European run with productions in Mannheim, Germany in May, followed by performances in Lodz, Kielce, and Warsaw, Poland. The play was performed at the new Museum of the History of Polish Jews in Warsaw. It was brought to Poland as part of the celebration of the Year of Karski by the Polish History Museum under the sponsorship of Museum Director Robert Kostro and Ewa Wierzynska, leader of the Jan Karski, Unfinished Mission educational and public awareness program.

In Terre Haute, the foundation was represented by President Wanda Urbanska and Board Member Bozena Nowicka McLees. "Arthur Feinsod is a gifted playwright," commented McLees. "He has captured so beautifully the complex story, as well as the intensity of Polish patriotism that Karski and his peers felt at the outbreak of World War II."