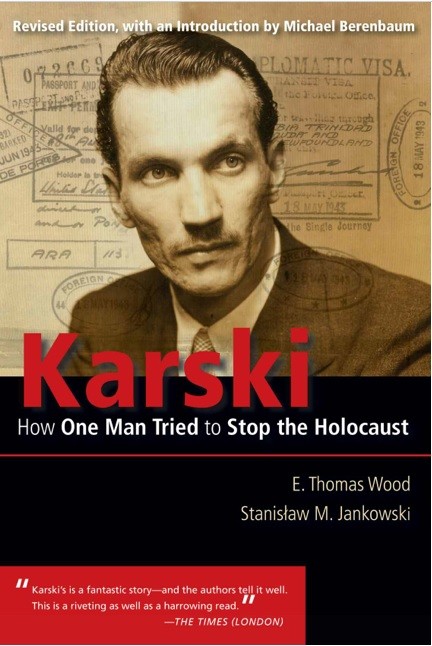 The new centennial edition of Karski: How One Man Tried to Stop the Holocaust was released last month by Texas Tech University Press and Gihon River Press. Written by Nashville journalist E. Thomas Wood and Polish historian Stanisław M. Jankowski, this updated version of the 1994 biography incorporates new material, including an account of the international campaign to celebrate the Karski legacy, led by the Jan Karski Educational Foundation and the Polish History Museum, as well as previously unpublished material from Karski's historic and eventful life.

"We are so pleased to see this definitive edition of Karski's life -- so thoroughly researched and well written -- back in print," says Foundation President Wanda Urbanska. She notes that the book is on the foundation's recommended reading list; from this accessible account, readers will learn not only about this great hero of the twentieth century but about the complicated subject of Polish history.

Jan Karski had long resisted approaches from writers and publishing houses asking for his memoirs in the last two decades of his life. But, in 1992, Wood says, he granted the authors of this work unprecedented access to himself and to his personal archives. “He was reluctant at first,” Wood recalls, “but then I surprised him with copies of recently declassified documents of operatives from the Office of Strategic Services – predecessor of the CIA – reporting on his public activities in the United States in 1945. He got a real kick out of seeing how an intelligence service evaluated what he had been doing.”

That discovery, along with Professor Karski’s desire to plunge into new activities after his wife Pola’s suicide in July 1992, led to relationships with the authors that spanned the rest of Karski’s life. After granting numerous interviews and cooperating with Wood and Jankowski as they were conductingarchival research in several countries, Karski helped promote the book. He made appearances at book signings across North America and, after foreign language editions came out, in Germany and Poland as well.

The new edition brings to light:

Author Wood continues to chronicle the latest Karski-related developments on the book’s Facebook page and on Twitter (@KarskiBio). Readers should be on the look-out for information about Wood's appearances and book signings planned for September in Chicago and November in New York City. The book can be ordered through this link.