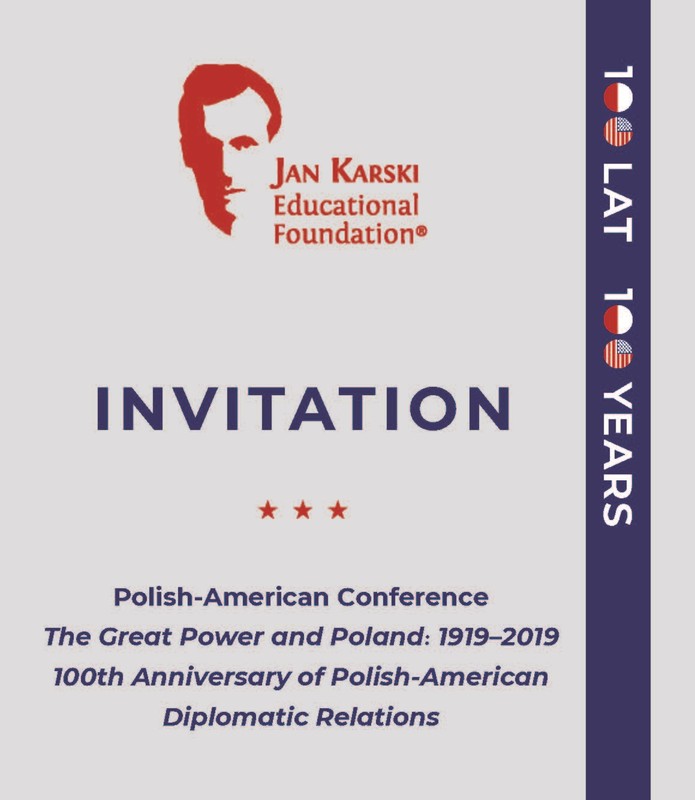 The Jan Karski Educational Foundation together with its sister organization, Fundacja Edukacyjna Jana Karskiego, and the University of Warsaw are organizing a conference The Great Power and Poland: 1919-2019. 100th Anniversary of Polish-American Diplomatic Relations. We will also be celebrating the Centennial Anniversary of Georgetown University's Edmund A. Walsh School of Foreign Service. The conference will be accompanied by a ceremony honoring professor Peter F. Krogh with the Spirit of Jan Karski Award. It will take place on October 4, 2019, at the University of Warsaw, Poland.

The official opening ceremony of the conference will feature the Rector of the University of Warsaw and top officers of Fundacja Edukacyjna Jana Karskiego and the Jan Karski Educational Foundation. The core of the conference will consist of two panels focusing on the following two areas: values and interests in Euro-Atlantic relations and the consequences of the return of power politics. The program will also include a ceremony awarding Professor Peter F. Krogh, Dean Emeritus of Welsh School of Foreign Service at Georgetown University, with the Spirit of Jan Karski Award, which is bestowed by the Jan Karski Educational Foundation and Fundacja Edukacyjna Jana Karskiego.

The premiere of the special reissue (Polish edition) of Jan Karski’s book The Great Powers and Poland: From Versailles to Yalta will augment the conference.

The participation in the conference is free, but please confirm attendance at kontakt@jankarski.net by September 27, 2019.

The official language of the conference is English.

Conference program and attendees are subject to change.