On a Mission to Better the World 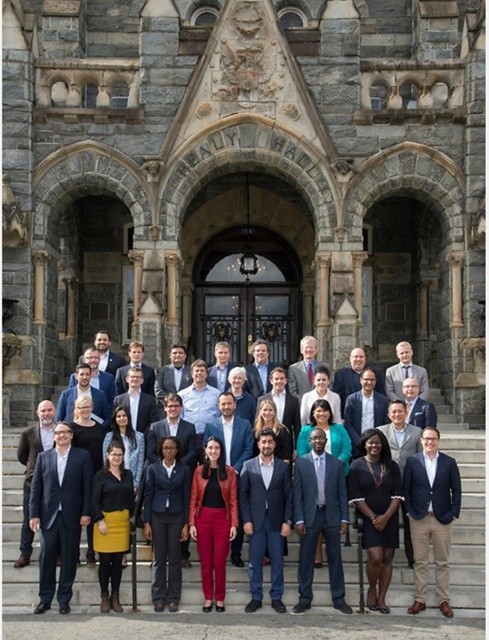 The 2017 Georgetown Leadership Seminar took place from October 22–27. Piotr Zygadło and Magdalena Brzozowska, the recipients of the Jan Karski GLS scholarship, funded by the Jan Karski Educational Foundation, are hereby sharing their reflections from this prestigious event.

“As a scholar sponsored by the Jan Karski Educational Foundation, I hit the road to Washington DC on Sunday, the 22nd of October for the 35th Georgetown Leadership Seminar, a one-week event gathering of prospective world leaders. This year, Georgetown University invited 32 participants representing 25 countries. Poland was represented by two JKEF scholars—me and Magdalena Brzozowska—and one colleague representing the business sector, Tomasz Szpikowski

All six days of the seminar were fully scheduled. We all became familiar with US foreign policy and discussed global problems of today’s world, including climate change, proliferation of nuclear weapons, threats posed by the North Korea and Russia, and conflicts in Africa. What interested me the most was a debate on the global economic issues and the visit to the headquarters of the World Bank

All lectures were provided by the best professors with not only a perfect theoretical background but also enormous practical experience. I was honored to meet the former Secretary of State, Madeleine Albright and the former US ambassador to Poland, Stephen Mull. But the most unforgettable and heartbreaking experience was the meeting with Peter Krogh, a friend of Jan Karski. Peter Krogh is a former dean at the Georgetown University. I had the pleasure to talk to him during Monday opening dinner, sitting next to him. On the following day, all GLS participants were invited to his house. You cannot imagine how proud I was to be a Pole while Peter Krogh, during the lunch organized in honor of Jan Karski, spoke about Jan Karski’s legacy. Everybody was extremely impressed by the Jan Karski story

Strengthened by the participation in the GLS 2017 and by being part of the Jan Karski legacy and his recognition at Georgetown University—me, Magdalena, and Tomasz have come back to Poland with new force to continue our governmental or business work with a decision to be more involved in Foundation activities.

GLS 2017 was well organized by James Seevers, Director of GLS, and Helen F. Mc Neill, GLS Consultant. It was the only opportunity for me to meet the wonderful people from all over the world and from different walks of life. But we have one thing in common: we all want to change the world—paraphrasing President Trump’s motto— 'to make it great once again.'

I would like to thank the Foundation very much for giving me the possibility to participate in the GLS 2017 and involving me in the Jan Karski legacy. For me, Jan Karski means not only uttermost war bravery, but essentially the morality and values he believed in and represented.”

“In October this year, I had the honor to participate in the Georgetown Leadership Seminar on a scholarship from the Jan Karski Educational Foundation. My dominant feeling both in the US and after returning to Poland was an awareness of participation in an extremely prestigious, guaranteeing the event had the highest standards.

Topics of the Seminar included current, key issues in the field of international politics, including issues related to nuclear threats, terrorism, globalism, challenges in the field of climate change, democratization, as well as the future of the international legal system. The lectures were conducted by specialists recognized in the field, including former Secretary of State Madeleine K. Albright, Director of the Institute for the Study of Diplomacy Barbara K. Betline, Dean for Graduate and Faculty Affairs at the School of Foreign Service Anthony Clark Arend, Dean of the Edmund A. Walsh School of Foreign Service Joel Hellman, as well as many other eminent professors and diplomats.

As part of the seminar, we visited the World Bank, where we met with the Vice-President of the Bank, Mahmoud Mohieldin, as well as Poland's representative at the Bank, Deputy Executive Director Mrs. Paulina Gomulak. Apart from lectures, the program also included other attractions, including dinner at the 19th century university library, participation in a concert, as well as many great lunches and dinners in picturesque Georgetown.

In addition, we participated in informal meetings, including with Peter Krogh, former Dean of the School of Foreign Service, co-founder of the program, as well as a longtime associate and friend of Jan Karski and Carol Harrison, a renowned photographer and author of a photo album devoted to our Patron. The participants of these meetings emphasized Jan Karski's undisputed moral authority and its invaluable role in promoting values that form the basis of the modern world legal order, as well as building the prestige of the faculty. Conversations with these eminent personalities were an extraordinary experience, primarily because they knew our Great Countryman personally.”

The Jan Karski GLS scholarship is granted annually by the Jan Karski Educational Foundation to young Polish scholars, diplomats, and social activists. Georgetown Leadership Seminar is an annual premier executive education program at Georgetown University’s School of Foreign Service, where Jan Karski served as a distinguished professor for 40 years. It brings rising leaders from around the world to the campus for a week of intensive discussion on major international issues. The GLS vision is to promote dialogue on global affairs among individuals who will help shape the future of their organizations and countries.

Related pictures: On a Mission to Better the World