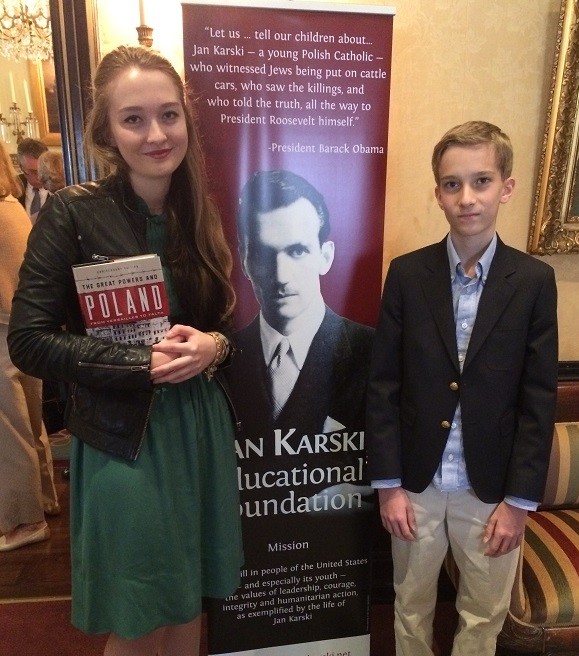 Natalia and Jan Mrozek at the Breakfast

Keynote speaker Henry Fortunato, director of public affairs at the Kansas City Public Library, spoke eloquently about the tremendous impact Jan Karski has had on his life -- from the moment he met him in 1974 at freshmen orientation. "I was immediately intrigued," he told the group of 30 foundation supporters who gathered to raise a toast to Karski, dine on scrambled eggs and bacon and share stories about the late emissary for the Polish Underground. Fortunato took several classes with Karski and was so “enthralled” by the professor that he said that he minored in "Karski studies" at Georgetown.

After graduating from Georgetown in 1978, Fortunato joined the university's media relations department. As the 40th anniversary of the German invasion of Poland and the outbreak of World War II approached, Fortunato hatched the idea to share Karski's story with a larger audience. Mustering his newly minted powers of persuasion, he convinced Karski to be interviewed by legendary Washington Post feature writer Henry Mitchell. (" 'I'll do it for Georgetown,' " Fortunato remembers a reluctant Karski saying.) The article -- which appeared in the Post on August 31, 1979 -- was subsequently picked up by the International Herald Tribune, where documentary filmmaker Claude Lanzmann read and first learned about Karski. The rest, as they say, is history. Karski's interview at the end of Lanzmann’s Shoah led directly to Karski’s international revival.

Fortunato said that he lives near the Jewish Community Center in Overland Park, Kansas, where a recent hate-based shooting occurred. That event “reminds us that mindless intolerance still stalks the planet,” he said, and that “Karski should be known to new generations.”

Dramatically, a young man, Jacek J. Slowikowski Jr. then told the group that if it weren’t for his grandfather, Karski wouldn't have survived the war. Slowikowski's grandfather, Dr. Jan Slowikowski, saved Karski’s life after his capture by the Nazis. (The episode is detailed in our website story.) Interestingly, Dr. Slowikowski, a newly minted surgeon in 1940, was even younger than Karski at the time he saved him, but was able to devise an escape plot to return Karski to the hands of the Polish Underground. In retaliation for the escape, the doctor’s brother was murdered by the Nazis, along with 31 other Poles, many of whom had nothing to do with the escape. Slowikowski ended his account by saying that Karski “embodies true Polish values.”

Former Karski students Giordano “Gerry” Chiaruttini, Robert Billingsley and Michal Mrozek talked movingly about their memories of Karski. Chiaruttini last saw Karski on his wedding day in 1979 -- a chance encounter, all the stranger as he hadn't seen him since his graduation in 1962. Chiaruttini said that Karski’s blessing to himself and his wife Beverly was as meaningful as if it had come from the Pope himself. Billingsley spoke about his friendships with Bill Clinton and with Karski. As a student from Poland studying international finance, Mrozek joined Karski’s class to learn things about the war that he didn’t know about. Besides academic information, Mrozek said that “Karski’s guidance was invaluable when I was far from home.”

Architect Julian Kulski, who served as a boy in the Polish Underground during the war, spoke of being influenced by Jan Nowak-Jezioranski and Karski. When he later met Karski, he was gratified to hear Karski’s opinion about Kulski’s father, the mayor of Warsaw, and his important role in the Polish Underground. Thomas Rozman, who traveled from Richmond, Virginia for the special breakfast, stated that “Karski is a metaphor of who we are – the Polish ideal of individual liberty that is an American idea, but originated with Kosciusko’s leadership during the American revolution.” Mrozek urged those present to support the work of the foundation, which is to make Karski's legacy known to students in America and around the world.

Dr. Slawomir Zagorski represented the Embassy of the Republic of Poland at the breakfast. Warsaw-based Foundation board members Przemyslaw Krych and Krzysztof Zakrzewski enjoyed the special event, along with board chairman Andrzej Rojek, and Chicago based board member Bozena Nowicka McLees. Advisory Board members Gregory Wierzynski, Cheryl Fishbein and Robert Billingsley rounded out the gathering. All breakfast guests went home with copies of the new centennial edition of Karski's book The Great Powers and Poland, and special foundation pens. "I couldn't think of better party favors," one lingering guest remarked after the breakfast. "This was an extraordinary moment," another said. "I will remember this gathering for many years."