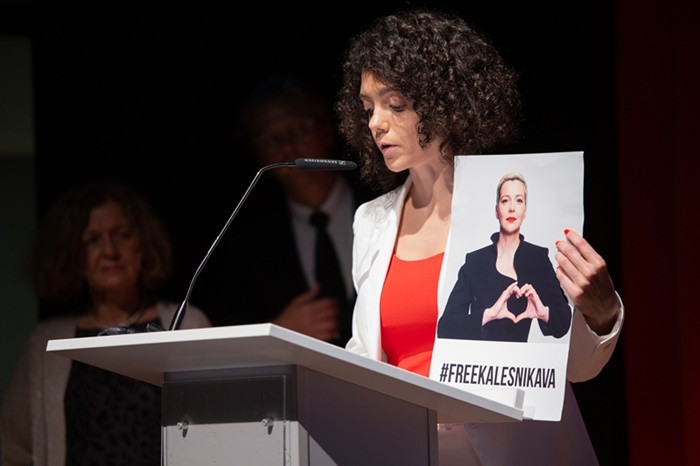 Maria Kalesnikava’s sister, Tatsiana Khomich, who accepted the Spirit of Jan Karski Award on behalf of the imprisoned Belarusian opposition leader, talks about the ordeal of political prisoners in her home country. (Photo: Ewa Radziewicz)

The ceremony of bestowing the Spirit of Jan Karski Award and Karski2020 for Youth Award by the Jan Karski Educational Foundation (JKEF) and its sister organization in Poland, Fundacja Edukacyjna Jana Karskiego (FEJK), took place on June 22, 2021, at the POLIN Museum of the History of Polish Jews in Warsaw, Poland. It opened with an engaging video posing a question of what values are relevant to today’s world.

The Jan Karski Educational Foundation’s Chairman of the Board, Andrzej Rojek, who flew in from New York specifically to participate in the event, welcomed notable guests present at the ceremony – the Polish Ambassador to Belarus, Artur Michalski (recently recalled in protest to the situation in Belarus), the ambassadors of Italy, Canada, and Israel, members of the Award Committee and JKEF Board, Georgetown University alumni, former Jan Karski students, and patrons. Ewa Junczyk-Ziomecka, President of Fundacja Edukacyjna Jana Karskiego, recognized Michael Schudrich, the Chief Rabbi of Poland, Paweł Rymarz, a lawyer and main sponsor of the awards and event, as well as the Polish Righteous Among the Nations and members of Children of the Holocaust Association, all in the audience. She briefly talked about the history of the Spirit of Jan Karski Award, established by the sister foundations in the U.S. and Poland to recognize people who act with empathy and integrity, fighting for human rights no matter what the circumstances. A video about Jan Karski and the Spirit of Jan Karski Award illustrated the point.

It was followed by another video presenting the Award finalists: Roméo Dallaire, a Canadian lieutenant general, who fights against the participation of children in armed conflicts and helps veterans struggling with PTSD; Maria Kalesnikava*, an imprisoned Belarusian opposition leader; Szymon Malinowski, an atmospheric physicist at the Polish Academy of Sciences, who spreads awareness about climate issues; Janina Ochojska, founder of the Polish Humanitarian Action, who is working for people harmed by war conflicts, famine, and natural disasters; and Roberto Saviano, an Italian journalist, who exposes the deadly methods of the Italian Mafia.

Representing the Award Committee, Professor Adam Daniel Rotfeld, a Polish scholar, diplomat, and former Minister of Foreign Affairs of Poland, who accepted the posthumous Presidential Medal of Freedom for Jan Karski in 2012, announced that Maria Kalesnikava was this year’s recipient of the Spirit of Jan Karski Award. Please watch a short video presenting the recipient.

Since Maria Kalesnikava is imprisoned, her sister, Tatsiana Khomich, accepted the Award on her behalf and then informed the audience of the status of political prisoners in Belarus. There are over 500 political prisoners in her home country; they are not allowed visitors except lawyers; some prisoners have gone on hunger strikes; some have lost their lives under unexplained circumstances. However, Ms. Kalesnikava keeps her spirits high. Please read Ms. Khomich's acceptance speech: tatsiana-khomich-spirit-of-jan-karski-award-acceptance-speech.pdf.

Timothy Garton Ash, Professor of European Studies at the University of Oxford and a Senior Fellow at the Hoover Institution, Stanford University, and an expert of Central and Eastern Europe, presented the laudation. He talked about the history of peaceful political protests in the world and the critical role of women in the Belarusian political scene. He praised Maria Kalesnikava’s courage and her love for freedom.

The second half of the event focused on the Karski2020 Award for the Youth. Monika Korowajczyk-Sujkowska, director at the National Centre for Research and Development and alumnus of the 2018 Georgetown Leadership Seminar (thanks to a JKEF scholarship), introduced the Award presented by the Foundation for the first time to recognize young people (under 30) for their humanitarian activism and civic engagement during the challenging times of the global Covid-19 pandemic. She also talked about a special “Karski gene” that allows young people to get involved in noble causes.

Members of JKEF’s Board of Directors, Michał Mrożek and Maciej Dyjas, and FEJK’s Director for Development, Bożena Regulska-Komornicka presented the Karski2020 Awards to the following individuals: Urszula Woźniak, a medical student, who has been taking care of COVID-19 senior patients and organized voluntary hospital work among medical students; Aleksandra K. Wiśniewska, who participates in humanitarian action in war zones, mainly in Yemen; and Dr. Tomasz Głażewski, a medical doctor who takes care of homeless people and has founded the “Ambulance of the Heart” Foundation. In their acceptance speeches, all recipients stressed the joint effort in the success of their work and thanked all people who were instrumental in their accomplishments. In addition, Dr. Głażewski expressed his conviction that you do not need to aim at changing the whole world to make a difference – it is enough to change the small world close to you.

Please see more information about the recipients and all nominees for the Karski2002 Award.

The event ended with a concert presented by a Polish actress and singer, Katarzyna Groniec, accompanied by a group of musicians.

Despite the capacity limits due to the pandemic, the event gathered a big audience, including many children. The MC for the evening was a Polish actor, Jakub Gierszał. He played Karski in a Polish radio series about the Polish emissary and has been commissioned to give his voice to Karski on the audiobook of the Polish edition of the Story of a Secret State. The event was organized by the Jan Karski Educational Foundation and Fundacja Edukacyjna Jana Karskiego in cooperation with the POLIN Museum of the History of Polish Jews, the National Freedom Institute (NIW), and the Civil Society Organizations Development Program (PROO), under the media patronage of Rzeczpospolita newspaper. The awards and ceremony were underwritten by the Rymarz Zdort Law Firm.

*Some sources spell her last name as Kolesnikova.