Outrage over 11 Years for Maria Kalesnikava 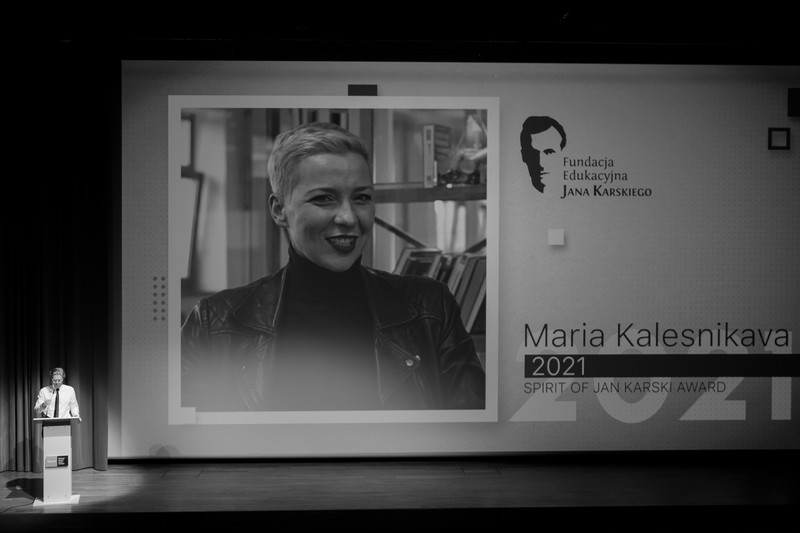 Maria Kalesnikava (alternative spelling: Kolesnikova), a Belarusian opposition leader, musician, and recipient of the Spirit of Jan Karski Award, has been sentenced to 11 years in a correctional colony for her involvement in 2020 protests against the anti-democratic rule of Alexander Lukashenko.

This sentence is disgraceful and unjust. It is a violation of human rights and fundamental moral and ethical principles.

Maria Kalesnikava (b. 1982 in Minsk) is a Belarusian musician turned opposition activist and leader of the pro-democracy movement. She graduated from the Belarusian State Academy of Music, where she studied conducting and the flute. She also received M.A. in Early Music and Neue Musik from the State University of Music and Performing Arts in Stuttgart, Germany. As a respected conductor and flute player, she toured Germany and Belarus with great success. She also organized international cultural projects in both countries, including the music enrichment lecture series, “Music Lessons for Adults,” and served as the art director of the OK16 culture club in Minsk.

After befriending Viktar Babaryka, president of Belgazprombank and an arts patron, she realized the need for political change. She became involved in his bid for the 2020 presidency against the incumbent, Alexander Lukashenko, who has been in power since 1994. When Babaryka and his son were arrested in June 2020, Kalesnikava became the presidential campaign manager for Sviatlana Tsikhanouskaya. After the dramatic and believed to be a fraudulent election on August 9, 2020, Kalesnikava became the true leader of the opposition. She participated in mass demonstrations against Lukashenko’s regime, becoming a role model and symbol of an independent woman who achieves success despite the prevailing macho mentality of Belarusian society.

In the same month, Kalesnikava joined the presidium of Coordination Council, which made an effort to engage in a dialogue with the Belarusian regime, and announced the will to create a new political party, Razam. Her political activism was halted on September 7, when she was detained and pressed to leave Belarus. However, during the attempt to expel her from her country, Kalesnikava destroyed her passport, strengthening her image as an uncompromising anti-regime leader. Her act resulted in an arrest on the grounds of attempting to incite the overthrowing of the constitutional state power and harming national security, which carries a sentence of three years in prison. Just like other political prisoners, she waited a year for the trial. All appeals by her layer to free her on bail were denied.

In June 2021, she received the Spirit of Jan Karski Award from the Jan Karski Educational Foundation for demonstrating the values represented by Jan Karski through fierce activism on defending human rights. Maria Kalesnikava’s sister accepted the award on behalf of the imprisoned activist. On September 6, 2021, Maria Kalesnikava was sentenced by the court in Minsk for 11 years in confinement. Despite numerous calls from the public, the court hearings took place behind closed doors.