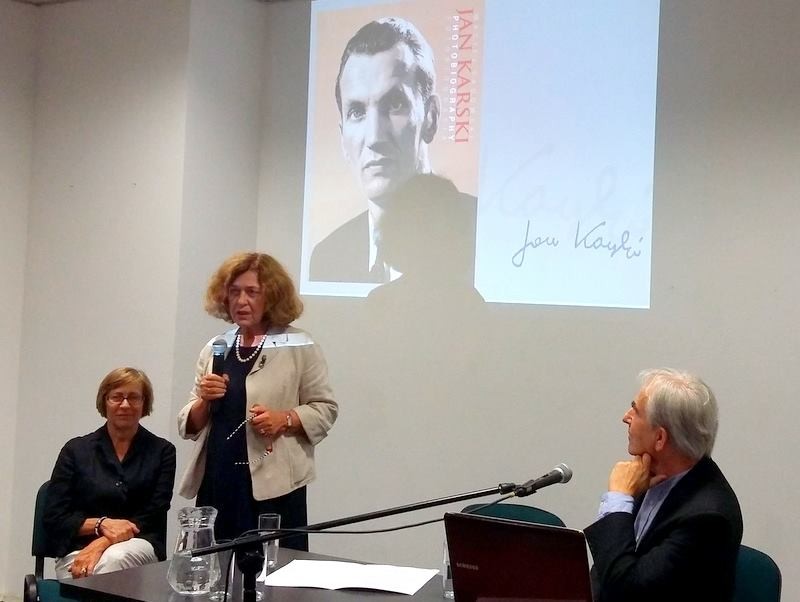 Warsaw, Poland –The exhibition “Jan Karski: Mission for Humanity” opened on August 25 at the Jewish Historical Institute, in conjunction with the 12th Singer Jewish Culture Festival in Warsaw, Poland. This special evening was devoted to the famous emissary of the Polish Underground, Jan Karski. The opening ceremony included a discussion led by Ewa Junczyk-Ziomecka, President of Fundacja Edukacyjna Jana Karskiego and Ewa Wierzyńska, a Jan Karski Educational Foundation Board Member.

Based on a bilingual publication Karski Photobiography, which was created by Maciej Sadowski of the VEDA Publishers, the exhibit was presented thanks to a common effort of Fundacja Edukacyjna Jana Karskiego (sister organization of the Jan Karski Educational Foundation), VEDA Publishers and Shalom Foundation. The exhibit was available for public viewing from August 24-28.

The opening of the exhibit was attended by the Director of the Polish History Museum in Warsaw, Robert Kostro and representatives of the POLIN Museum of the History of Polish Jews. Additionally, Maciej Wierzyński, a Polish journalist and author of Emissary in His Own Words – a compilation of his interviews with Jan Karski conducted for “Voice of America” – participated in the opening. The guests also included Andrzej Pilecki, son of Witold Pilecki, a famous volunteer prisoner at the Auschwitz Nazi concentration camp, Sigmunt Rolat, a philanthropist and a Foundation supporter, and many other people interested in Polish-Jewish relations. The exhibition attracted strong interest among the attendees and the lively discussion proved that Karski’s story is still unknown to many people.

The Foundation would like to thank all of its partners for collaborating on this project.