Captivated by Sold-out Performances of ”My Report to the World” 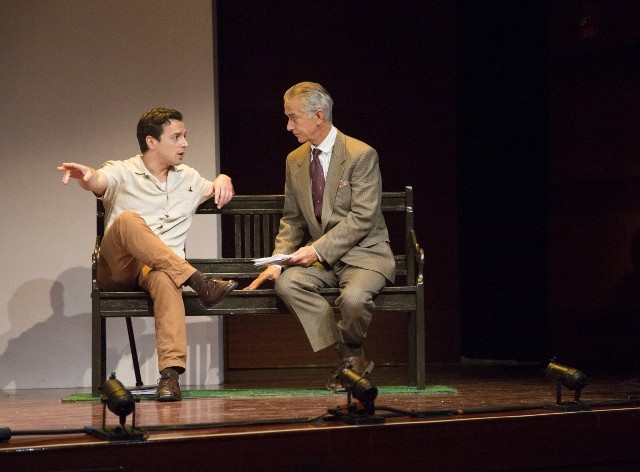 New York and Washington, DC – Seven sold-out performances of “My Report to the World,” a theatrical production about Karski, organized and sponsored by the Jan Karski Educational Foundation were attended by an enthusiastic audience of an estimated 3,200 people. This staged reading, written by Derek Goldman (who also directed the show) and Clark Young, starring an Academy Award nominated actor David Strathairn as Karski, was presented in partnership with The Museum of Jewish Heritage in New York, The Laboratory for Global Performance and Politics at Georgetown University, and Bisno Productions, with support from the US Holocaust Memorial Museum in Washington DC and the Polish Culture Institute in New York. The Producers Circle of this Karski Theater Project included Andrzej Rojek, Chairman of the Board of the Jan Karski Educational Foundation, as well as members of JKEF Advisory Board, Robert Billingsley, Cheryl Fishbein and Addie Palm.

First presented as part of the Karski Centennial at Georgetown University in April 2014 (with subsequent presentations in New York and Warsaw), the production has developed from a mere stage reading into a complex theatrical concept, in which each character is portrayed in a more sophisticated manner. In this new production, stage design illuminates the setting of the most critical scenes, and the intriguing choreography often serves as a symbolic rather than literal illustration to the narrative. Music and a brief video of Karski when he was filmed for "Shoah" had been added since the Georgetown debut. Those who are not familiar with Karski’s story are able to follow the locations and chronology of events with the help of captions displayed on the background wall. Framed between the opening line “Governments don't have souls, individuals have souls” and the closing line, “Professor Karski, I have a question,” the show presents an incredible example of courage and humanity, exposes the complexity and nuance of the times Jan Karski worked in, and fosters discussion about the responsibility of an individual and a role of governments in times of crisis.

Each show was followed by a question-and-answer session. In New York, Derek Goldman, Clark Young and David Strathairn (whose captivating performance will stay in the audience’s memory for a long time) talked about the creative process behind the production. Award winning journalist Andrew Nagorski remembered Karski's heroism, decency and humbleness and quoted another great Pole, the late professor Bartoszewski, who once said that "someone who could say did enough to save Jews, died helping them.” Documentary film maker Sławomir Grunberg talked about his new film about Karski “Lords of the Humanity.” The post-show discussion in Washington featured Mike Abramowitz and Jacek Nowakowski, both from the US Holocaust Memorial Museum, along with director Goldman. Other speakers included Director of the Museum of Jewish Heritage, David Marwell, Father Leo O'Donovan (the former President of Georgetown University), and Rabbi Elie Weinstock.

The show was graced by the presence of many notables in the audience, including US Ambassador to the UN, Samantha Power; Consul General of the Republic of Poland, Urszula Gacek of the Polish Consulate in New York; senior members of the Polish Embassy in Washington, DC, Sławomir Zagórski and Maciej Pisarski; former Deputy Mayor of New York, Ken Lipper; Chairman of the Board of the Museum of the Jewish Heritage, Bruce Ratner; Director of the Anti-Defamation League, Abe Foxman; as well as many of Karski’s former students and other celebrities.

The goal of the Karski Theater Project is to launch a professional production, and to secure regional and international partnerships for exclusive performance at theaters and educational venues worldwide. The Jan Karski Educational Foundation wishes to express their special thanks to Debbie Bisno of the Bisno Productions and David Marwell and Bruce Ratner of The Museum of Jewish Heritage for their leadership and support, as well as to all the sponsors and organizations who helped to bring this series into fruition.

Read our exclusive interview with David Strathairn, done in conjunction with the Georgetown performance.

Related pictures: Captivated by Sold-Out Performances of ”My Report to the World”