Karski – Let’s Take Care of Each Other 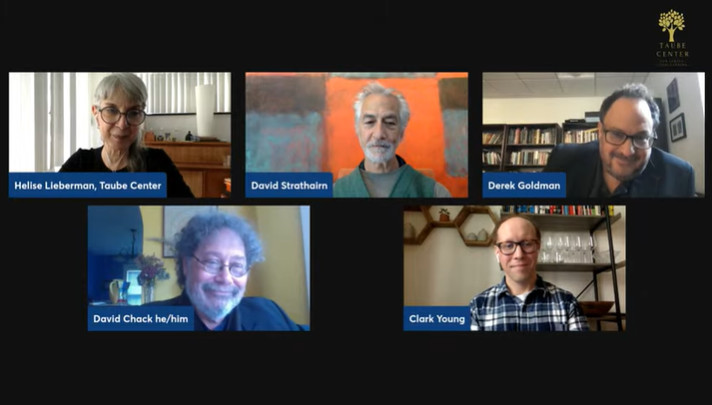 The creators of the theatrical production Remember This: The Lesson of Jan Karski participated in a webinar presented by the Taube Center for Jewish Life and Learning in Warsaw, Poland, on February 23, 2022, to discuss the origins and implications of this venture. Representing the Taube Center, Helise Lieberman introduced the panelists: David Strathairn, the Academy-Award nominated actor, who portrays Karski in the play; Derek Goldman, the co-writer and director of the play; Clark Young, the co-writer; and Dr. David Chack, a member of the faculty at The Theatre School at DePaul University in Chicago and Executive Director of the Alliance for Jewish Theatre, who moderated the discussion.

Clark Young briefly talked about Jan Karski’s background and his incredible mission. He also mentioned that—as a Georgetown University student—he passed the Karski statue on the campus almost daily but had no idea who he was until Derek Goldman, his former teacher at GU, approached him about the project several years later. Derek Goldman presented a short account of the inspirations behind the play and how it has evolved since it premiered at Georgetown University during the celebrations of Jan Karski’s centennial in 2014. He stressed that he always treated this material in reference to what is going on in the world today. Then, David Strathairn spoke about his first encounter with Jan Karski – it was while watching Claude Lanzmann’s documentary Shoah. The actor said he could not erase Karski’s powerful testimony from his mind. As a strong believer in theater’s mission to speak about the human condition and in his personal, civic responsibility, he jumped into the project right away.

The discussion circled around the questions that the play asks the audience: What does it mean to know? What is your responsibility? What is your duty as a citizen, as a human being? What will you do if faced with injustice? What risks are you willing to take to speak up about it? 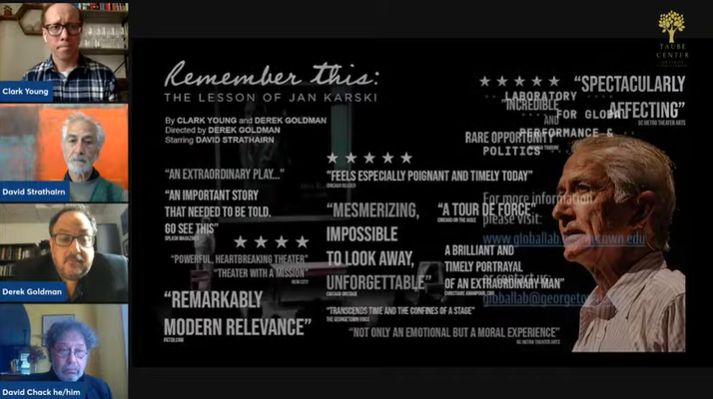 When talking about Karski’s mission, a lot of remarks focused on his encounter with Supreme Court Justice Felix Frankfurter, who said he was unable to believe Karski’s testimony. A question arose, “Why didn’t Frankfurter believe Karski?” David Strathairn argued that when one is presented with unspeakable horror, it may be too much for one’s mind to bear; maybe one is unable to reckon with that and turn this knowledge into action. Clark Young pointed out that there are no official records of Karski’s meeting with Felix Frankfurter or President Roosevelt, only Karski’s recollections, and that one has to rely on his photographic memory and ability to report without bias. When talking about Karski’s personality and legacy, Derek Goldman said that Karski exposes the failures of governments while at the same acknowledging his own. David Strathairn said that for him, Karski is the epitome of the call to take care of each other.

There was also a brief discussion of whether the government or the individual is responsible for others. Karski had experienced some government lapses in this regard since the U.S. did little to prevent the Holocaust, even after his warnings. With everything going on in the world, the individual must feel called upon to speak out and care for their fellow beings.

A parallel discussion took place in the chat box, where participants from all over the world, including people who knew Karski personally, commented on his legacy and inquired about where the play can be seen, urging to bring it again to Chicago and Washington, D.C, as well as to the Bay Area and places like Costa Rica and Israel.

Please sign up for the Jan Karski Educational Foundation’s newsletter at www.jankarski.net (at the very bottom of the homepage) to receive updates about the upcoming shows of the play and the release of the film based on the theatrical production.

Written by Clark Young and Derek Goldman and directed by Derek Goldman, Remember This: The Lesson of Jan Karski was created by The Laboratory for Global Performance and Politics at Georgetown University. The tour of the play is organized with the support of the Jan Karski Educational Foundation.