Off-Broadway Premiere of Remember This: The Lesson of Jan Karski
The Florida Council for The Social Studies Conference Features Karski Speaker
Show all

Do We Place the Interest of Another Human Being Above Our Own? 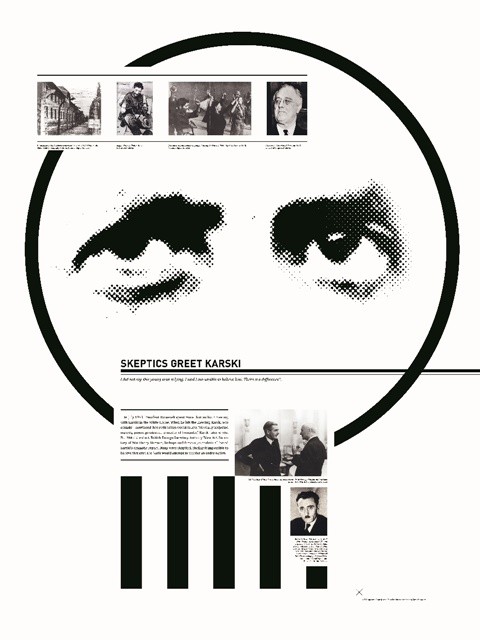 One of the panels of the exhibition The World Knew. Jan Karski's Mission for Humanity

Oxford, OH—The exhibition about the life of Jan Karski and his courageous efforts to bring his eye-witness report to the West, The World Knew: Jan Karski’s Mission for Humanity, opened at the Miami University in Oxford, OH, on November 11. The main speaker for the opening reception was Marek Dollár, Dean and Professor of Engineering Science at Miami University, and former honorary consul of the Republic of Poland. He shared the story of Jan Karski’s life and his incredible mission to bring his eye-witness report about the slaughter of the Jews to the Western leaders. He noted Karski’s disenchantment about their inaction.

Karski’s “cry for help was being silenced by the so-called voices of reason, by disbelief, by cold calculations or simply by indifference. At the time Karski was sounding the alarm, most of Poland’s Jewish citizens had already been killed. But there was still time to save those who survived. It is hard to imagine what Karski felt when he realized that, after having made death-defying efforts to alarm the world about the ongoing genocide, his mission was futile.”

Dr. Dollár also talked about what we can learn from Karski’s story, and how his actions and principles relate to the modern world.

“This legacy is incredibly challenging,” he said, “because it makes us place the interest of another human being—often a foreigner, unkempt, sick, and degraded—above our own. It makes us replace selfishness with empathy, and fear with courage. The Karski legacy also puts pressure on humanity to protect people against genocide, war crimes, and the breaching of human rights. I genuinely believe that Jan Karski inspires us to guard the most fundamental issues of human dignity and human rights.”

The audience included a renowned Polish-American artist Anna Socha VanMatre, whose exhibition “To Those Who Warn” that traces the journey of terror experienced by the victims of Nazi atrocities was displayed last year at the International Youth Meeting Center in Oświęcim, located close to Nazi Germany’s former concentration camp in Auschwitz-Birkenau. (Please read the related interview with the painter here.) Together with her husband, Rick VanMatre, the artist donated a copy of the first edition of Karski’s Story of a Secret State (1943) to the Miami University Library.

The event also included the presentation of another exhibit, Bearing Witness: The Holocaust and Jewish Experience, which examines the global events of the Holocaust through the personal stories of Miami University alumni. It was introduced at the reception by Alia Levar Wegner, Digital Collections Librarian.

The World Knew was created by the Polish History Museum in Warsaw in cooperation with The Jan Karski Educational Foundation, sponsorship from the Ministry of Foreign Affairs of the Republic of Poland, and the National Endowment for the Humanities. Its exhibition at Miami University was sponsored by Hillel Foundation at Miami University, Judith A. Heiny and Piotr Chomczynski, and Anna and Marek Dollár. Special thanks go to Hillel Foundation’s Director of Development, Joel Miller, Dean and University Librarian, Jerome Conley, as well as Masha Stepanova, William Modrow, and Alia Wegner.

The exhibition about Jan Karski will be on display at Miami University until June 15, 2020.

Related pictures: Do We Place the Interest of Another Human Being Above Our Own?