Do Not Remain Silent 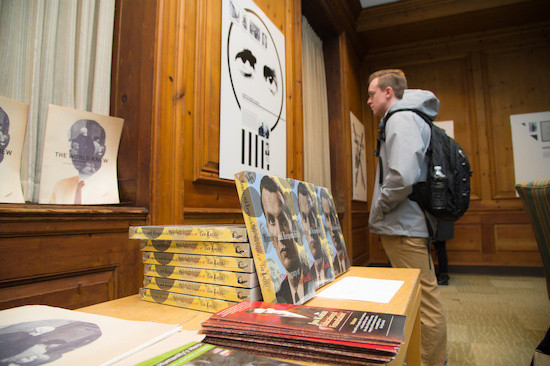 The opening of the Karski exhibition at Manhattan College (Photo: Joshua Cuppek)

New York – The celebrated exhibition honoring the life and legacy of Jan Karski, The World Knew: Jan Karski’s Mission for Humanity opened on February 9 at the Holocaust, Genocide and Interfaith (HGI) Education Center at Manhattan College (MC) in Riverdale, NY, during an event organized in collaboration with the Jan Karski Educational Foundation. The opening ceremony was honored by the presence of Dr. Brennan O’Donnell, President of Manhattan College, Andrzej Rojek, Chairman of the Board of the Jan Karski Educational Foundation and John Paluszek, former President of MC’s Alumni Society. A large group of MC’s students, faculty and alumni, as well as members of the local community, also gathered for the opening.

Dr. Mehnaz M. Afridi, assistant professor of Religious Studies and HGI Education Center’s Director opened the evening with a remarkable story of Moshe the Beadle, who miraculously survived the mass murder of Jews by German Nazis and thus became a witness to the Holocaust. But nobody would listen to him. “Jan Karski in a sense was Moshe the Beadle,” she said. “[He was] one of the unheeded witnesses, the messenger, the man whose humanity was transformed by witnessing the dehumanization of others. “[He] was brave,” she added. “A Catholic and a resistance fighter who took his message wherever he could to rescue his country and the Jews from one of the darkest periods of history.” She also pointed out Karski’s humbleness and his commitment to speak the truth, and concluded by challenging everyone to be courageous and “not to remain silent in the face of racism and prejudice,” especially now as we are encountering extremism in every possible form. Prompted by a question from a student, she also talked about Karski’s life after the war.

Andrzej Rojek presented the history of the Jan Karski Educational Foundation, which grew out of a successful Jan Karski US Centennial Campaign that placed Karski’s name for nomination for the Presidential Medal of Freedom (bestowed on Karski posthumously in 2012). He also talked about the Foundation’s mission to honor the great emissary and promote his legacy, by instilling values of leadership, courage and integrity, as exemplified by the life of Jan Karski.

The opening remarks were followed by the viewing of the exhibition and a lively discussion. Students were impressed by Karski’s unique story and his motivation – as a non-Jew – to save and protect the oppressed people.

On Monday, February 29 at 7 p.m., Manhattan College will host E. Thomas Wood, an investigative journalist who has written for the New York Times and Wall Street Journal, to discuss Karski’s work and life in the Alumni Room of O’Malley Library. Wood is the author of Karski: How One Man Tried to Stop the Holocaust and served as a writer and principal narrator of the 2015 documentary Karski & The Lords of Humanity.

The goal of the Holocaust Resource Center, founded in 1996, is to foster the interfaith dialogue through organizing lectures by Holocaust scholars, as well as workshops for area teachers and exhibitions about genocide. The tour of The World Knew: Jan Karski's Mission for Humanity traveling exhibition is organized by the Jan Karski Educational Foundation. The exhibition was created by the Polish History Museum with major support from the Polish Ministry of Foreign Affairs. Additional funding was provided by the National Endowment for Humanities. Any views, findings, conclusions, or recommendations expressed in this exhibition publication do not necessarily reflect those of the National Endowment for the Humanities.

Related pictures: Do Not Remain Silent