Success of the Karski Documentary in Russia 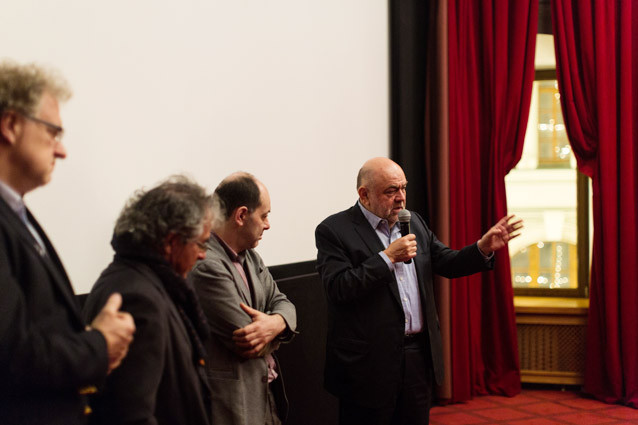 Russia – International Holocaust Remembrance Day (January 27) was celebrated in Russian theaters across the country by the screenings of the documentary Karski & The Lords of Humanity (which in Russia goes by “Jan Karski. Righteous Gentile”). This outstanding film was directed by a Polish-American filmmaker, Sławomir Grünberg, who is the winner of an Emmy Award. It was co-produced by Dariusz Jabloński, the screenplay was co-written by Katka Reszke, and it received financial support for its US distribution from the Jan Karski Educational Foundation.

Since then, the movie has played in dozen theaters in Moscow, where life-size posters were displayed all over the city, as well as in over 40 theaters across Russia in 15 cities, such as St. Petersburg, Novosibirsk, Yaroslavl, Kazan, Chelyabinsk, Omsk and Yekaterinburg. This widespread distribution brought to the audience the story of Jan Karski, practically unknown in Russia. There have been plenty of fantastic film reviews, along with great radio and TV coverage (see below). Sergiej Yurski, a famous Russian actor, who gives his voice to Jan Karski, drew additional audience to the movie. Together with veteran television personality Vladimir Posner, who served as a narrator, they both created a new viewing experience.

The director, producer and creators traveled to many of the screenings and talked to the audience about Karski and the process of making the movie. One of these events was also attended by the president of the Russian Jewish Congress, Yuri Kanner, who said that people did not believe in Karski’s eye-witness report, because “we believe not in what we should believe in, but in what we want to believe in.” (See pictures from this event here.)

Numerous Russian newspapers and online magazines devoted a lot of space to the discussion about the movie, Karski and his life and mission, as well as the Holocaust.

Sergey Sychev, a Belarusian movie director, opens his review by describing the famous interview with Karski by Claude Landsman, which he conducted for but never included in his movie about the Holocaust Shoah, parts of which are used in Grünberg’s film: “These words and this voice can never be forgotten ever. You will hear this voice in your head, the [heavy] accent and the intonation until the end of your life. You will mentally meet his gaze and shyly avert your eyes. If you have not met him yet, just remember the name: Karski.” Sychev goes on to describe Karski’s life and his mission and then the reaction of the audience – shocked and in disbelief. “Tens of millions of people perished in that war,” he writes, “but when you look at Jan Karski, you realize that he was among the first ones to fight the war and also one of the first ones to win it. By himself.” (Read the full article in Russian, here.)

Anton Dolin, a Russian journalist, film critic and scholar says that the movie is about “The unique fate. The power of the individual. About thee choice…About a lonely man who speaks, speaks, speaks, and does not give an uncomfortable truth fade away. He does so in spite of everything. Without the hope of being heard.” (Read the full article in Russian, here.)

The showings were accompanied by television interviews and fascinating discussions about the legacy of Jan Karski. (See one interview, in Russian, here.)

Read also selected articles, reviews and interviews, all in Russian:

Radio Svoboda: “Why the World Did not Listen to Jan Karski” – interview with Vladimir Posner

Meduza: “He willingly went to the ghetto” – interview with a Russian poet Elena Fanailova – about the movie, about Jan Karski and the Holocaust:

Novaya Gazeta: “With his own eyes” by Larisa Malyukova

Gazeta: “The memory of these people must be alive” by Igor Kariev

Redrumers: “Black Mirrors” about the movie and other documentaries and publications on the Holocaust

Harvard Business Review: “Do you want to learn how to think?” by Marietta Chudakova