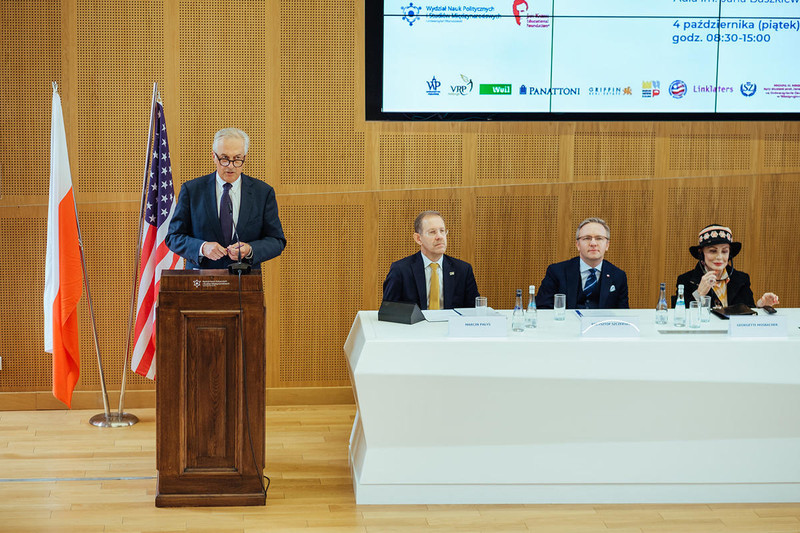 Chair of the Board of the Jan Karski Educational Foundation, Andrzej Rojek, welcomes the conference audience (Photo: Przemek Bereza)

Warsaw, Poland - Georgetown University’s distinguished Professor Emeritus and former Dean of the School of Foreign Service, Peter F. Krogh, was honored with the Spirit of Jan Karski Award on October 4, 2019, during The Great Power and Poland: 1919-2019 conference at the University of Warsaw. It was awarded “for his inspirational leadership over 50 years in advancing Jan Karski’s historic legacy by bringing together the worlds of the academy and diplomacy to educate thousands of diplomats and television viewers around the world on the urgency of resolving violent conflicts and promoting mutual respect.”

Many notable guests attended the ceremony including the US Ambassador to Poland, Georgette Mosbacher, Secretary of State and Chief of the Cabinet of the President of Poland, Krzysztof Szczerski, and former US Ambassadors to Poland, Stephen Mull and Daniel Fried, as well as the Rector of the University of Warsaw, Marcin Pałys. Also present were representatives of Georgetown University: Ambassador Barbara Bodine, Director of the Institute for the Study of Diplomacy, and James P. Seevers, Director of Studies and the Georgetown Leadership Seminar at the Institute for the Study of Diplomacy at the Edmund A. Walsh School of Foreign Service.

Conference Program (Please note a change: there was an additional speaker in the first panel discussion—Mr. David Harris, Executive Director of the American Jewish Council.): the-great-power-and-poland-1919-2019-conference-program-updated-81862-d6f31-5d100.pdf