Karski Relevance – After the “Remember This” World Premiere 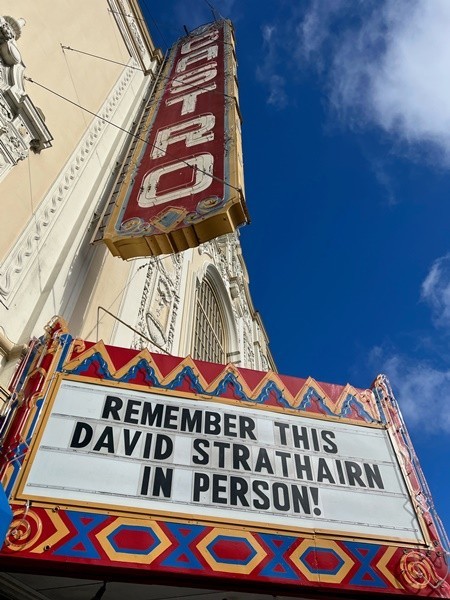 “An emotional and uplifting experience”

“I was blown away by the film.”

“It should be seen by people all over the world.”

“Karski’s story is so relevant to today.”

These were some of the comments shared by the audience of the movie Remember This after its world premiere on July 24, 2022, at the prestigious San Francisco Jewish Film Festival. The movie was hailed as a “must-see” top choice for the Festival so the un-summery cool and windy day, along with the still-in-place pandemic restrictions, did not deter crowds from gathering at the 100-year-old Castro Theater, an official San Francisco Historic Landmark.

Apart from chronicling Karski’s life and his famous mission of bringing his disturbing eye-witness report about the Holocaust to the Allies with the hope of intervention, the authors of the screenplay pose vital questions about the responsibility of every individual to act when confronted with atrocities, injustice, or corruption in their midst. David Strathairn asks these questions directly into the camera: “What can we do? What can I do?”

The audience felt transported to a different time and space and were awed at the man Karski was. The importance of telling the Karski story and its contemporary relevance were noted by several members of the audience, including Dana Blecher, Director of Grants Program at Taube Philanthropies, who shared this comment: “It is rare to experience a film that is both timeless and timely. Remember This poignantly illustrates the importance of speaking the truth, the inability of humans to believe the truth, and the repetitive cycles of human history. This gripping drama powerfully educates us to open our eyes and minds to the truth and act appropriately, even in the face of those who doubt.”

Many praised Strathairn’s portrayal of Karski as “singular” and “awe-inspiring.” The direction (Derek Goldman and Jeff Hutchens) was described as “inventive” and “engaging,” and the beautiful black-and-white cinematography (Jeff Hutchens) as “captivating.”

Among the audience was the niece of Szmul Zygielbojm, whose pleas for help during WWII and tragic suicide in protest of inaction play an important role in the story. Also present was Evelyn Posamentier, a poet who – inspired by the film – has written a poem in honor of Jan Karski. She believes that Karski may have been the last person to see her grandparents alive. They were murdered in the transit camp at Izbica. Both ladies were extremely grateful for the Karski story being immortalized in the movie.

The movie Remember This is based on the original stage production Remember This: The Lesson of Jan Karski, co-written by Clark Young and Derek Goldman (also a director) and created by The Laboratory for Global Performance and Politics at Georgetown University. Since its first presentation during the Karski centennial celebrations at Georgetown University in 2014, the project has been realized with the support of the Jan Karski Educational Foundation, which was represented at the premiere by Bozena U. Zaremba, JKEF’s Director of Programming.

We thank the San Francisco Jewish Film Festival organizers, particularly its Executive Director Lexi Leban, for including the film in their program and all who contributed to this story.

Please see how you can support the wider distribution of the movie here.

Related pictures: Karski Relevance – After the “Remember This” World Premiere