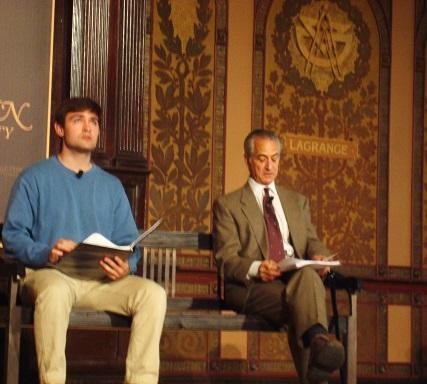 “Now, I go back 35 years—” is how Karski opens his famous testimony in Shoah, the 1985 documentary about the Holocaust, before breaking down in tears. Now, we go back in time, together with the charismatic David Strathairn, who, as Jan Karski walks across Georgetown University’s Gaston Hall stage on the imaginary streets of the Warsaw Ghetto, years after Karski's legendary mission to “hell.”

At this poignant moment, the actor stops in the middle of the stage, looks up, looks within himself — to remember and to contemplate his horrific experience from years back. This world premiere of the dramatic reading Remember This – Walking with Jan Karski was presented by Georgetown University’s Davis Performing Arts Center to commemorate the 100th anniversary of Jan Karski birth on April 24. Georgetown students eagerly play a group of Karski’s students, at the same time amply harvesting the intricacies of the acting craft by performing along the master, David Strathairn.

Strathairn does not play Jan Karski. He is Jan Karski. It’s not just the striking physical resemblance – tall, slim and handsome, dressed in an immaculate suit, Strathairn indeed looks the part. He also perfectly depicts professor Karski’s mannerisms and thick Polish accent. But most of all, he conveys his extraordinarily compassionate and insightful spirit, confirming the actor’s reputation of one of the finest and most sensitive artists on stage and screen.

The day before his riveting performance, Strathairn sat down with me at a European-style café in Georgetown to share his fascination with the Polish hero.

BUZ: With over seventy versatile movie roles to your credit and almost as many television and stage appearances, finding a common thread is a challenge, but is it fair to say that you like to take on roles which deal with vital issues, whether of historical, political or social nature?

BUZ: Is this why you agreed to the Karski project?

DS: Yes, very much so. I believe the theater has a responsibility not only to entertain, but to entertain ideas and there are so many important ideas available, especially when you consider the rapid evolution of events and global issues. There is a great opportunity for the dramatic literature to bring attention to things that may not be in the forefront of people’s knowledge – social issues, cultural developments and of course moments in history like Jan Karski experienced. I find it a very satisfying, enlightening and rewarding experience when theater can awaken people and pay respect to certain figures in history. It’s a real privilege to be a part of it.

BUZ: How did you first hear about Karski?

DS: I have a friend, a very politically active actor in Warsaw, who keeps abreast of Polish and international politics, and we were just talking, and Karski came up. Another friend of mine is writing a book about Joseph Czapski (who is even more obscure in many ways but no less an extraordinary man), and Karski came up in that conversation. And I had seen Shoah and I remember Karski’s testimony as life-changing for me.

BUZ: Who approached you about this project?

DS: It was Derek Goldman. I have worked with him before, on the project about Studs Terkel, here at Georgetown. Derek is a wonderful teacher and educator, as well as theater professional and he knew I like this kind of material.

BUZ: What appealed to you most about Karski?

DS: That is hard to say. There are so many things. For a young man to have agreed to what the Jewish and Polish Underground were asking him to do was very courageous, and I honor the impulse in him to do that. In the day of so many so-called whistle blowers and in the world where we have an infrastructure that allows testimony in so many ways, the role of somebody like Karski has been diluted. There is so much transparency because of this little device I am holding in my hand [voice recorder] and all technology, but back then those means were not available. It had to be one person doing it directly. He couldn’t write anything down; he didn’t have a tape recorder. He had to remember it in his mind and carry it with him.

BUZ: You pointed out that he acted out of an impulse – he didn’t think about it too much; it was natural for him; he just felt it was something he had to do.

DS: Exactly. And it’s an extraordinary impulse so to speak, but for a person to be so inclined to do that in their spirit is very admirable.

BUZ: How did you prepare for this role?

DS: I went back and watched his testimony, reading some of Story of a Secret State, and I spoke to Derek and Clark Young who has done an extraordinary job putting this all together, combing through so much information about Karski, picking out what’s most relevant and appropriate for the evening. We discussed that. There was something about Karski that compelled me to do it.

BUZ: What were the challenges?

DS: Well, they still remain.  It’s hardly a role that’s been given ample exploration or development but as any role in which one is depicting a personage as renowned and complex as Karski and whose life is held in such high respect, the challenge for the actor is just to give his true and sincere representation of the man. That’s always a challenge. I am not going to come any way close to nor could embody the man, but hope that those in the audience who don’t know him can get some idea of what and who he was, and those who did know him can respect that acquaintance, respect that intimacy they had with him.

BUZ: What did you learn about yourself through his persona?

DS: [Pause] I don’t know how to answer that. He is such an inspirational person just through his story alone. I am sure that anyone who had met him in person found his spirit very affecting. Just watching him on film, the energy, or the magnetism if you will, is very inspiring. I think by being around him, you could not help being affected by his presence even if you didn’t know what he had gone through.

BUZ: Many of his students and colleagues didn’t. Yet, he was a role model for them.

DS: Because when you meet with an opportunity of being around somebody like this, you are awakened and changed in inestimable ways. Seeing Karski’s testimony in Shoah when it first came out in New York City was indelible and to learn more and more about him since then has been a transformative experience. He is a standard of morality, of integrity and resolve, and of discretion and of someone who had gone through hell and could have broken and could have said, “No, I don’t want to do this,” or “I can’t do this,” and it was just the opposite.

BUZ: William Henry Seward, the US Secretary of State you portrayed in Spielberg’s Lincoln was once described as "one of those spirits who sometimes will go ahead of public opinion instead of tamely following its footprints.” You could also say that about Edward Murrow in Good Night and Good Luck. And now Karski.

DS: Add Robert Oppenheimer to this list because he was yet another extraordinary, influential, complex and stricken man [portrayed by Strathairn in a PBS documentary series]. For me, the more murky, complex and turbulent personality, the better. There is so much to mind and play – play is hardly what you do – but to depict, to represent such a character. It is needy; it is hefty; it is challenging, and I like to be challenged. These are the people that I hold in high esteem and that I would have loved to have met. The closer you get to them the better. If we are going to be thespians, the folklorists of history, then these people deserve their time on stage.

BUZ: And on screen.

DS: And on a screen.

BUZ: If there was a movie about Karski, would you consider yourself for the role?

DS: I would have to think about it. It would be extraordinarily challenging and an honor beyond imagination to tell his whole story, but at the same time I am sure it would be a wonderful exploration.

BUZ: You are an independent spirit yourself, not just because you play in so many independent movies. While enjoying a tremendous acting career, you seem to have successfully escaped the Hollywood frenzy and all that jazz. How do you keep your sanity?

DS: It’s always a choice of who and what you get involved with. I am not going to question anybody’s choices but that’s how I found my way to navigate the world of being an actor. So it’s simply a matter of priorities.

Follow this link to view Bearing Witness, The Legacy of Jan Karski, a later Georgetown University program about the play and ultimately a film based on the play.

The original play was Remember This: Walking with Jan Karski. Staged reading written/adapted by Prof. Derek Goldman and Clark Young (COL '09). Directed by Prof. Derek Goldman. Featuring David Strathairn and an ensemble of Georgetown students. Presented on April 24, 2014 by The Davis Performing Arts Center, The Theater and Performance Studies Program and The Laboratory for Global Performance and Politics. Bożena U. Zaremba is a Project Manager with the Jan Karski Educational Foundation.