Off-Broadway Premiere of Remember This: The Lesson of Jan Karski
The Florida Council for The Social Studies Conference Features Karski Speaker
Show all 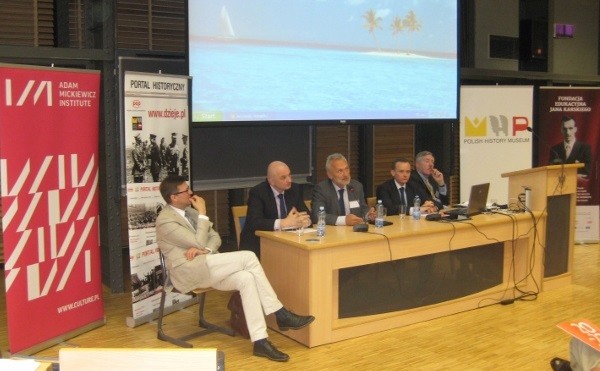 “An Appreciation of Jan Karski” plenary session organized by the Polish Institute of Arts and Sciences of America (PIASA) was held on June 21, 2014 at the Fifth World Congress on Polish Studies on the campus of Warsaw University.

PIASA President Professor M. B. B. Biskupski of Central Connecticut State University welcomed the participants gathered at Aula Hall. Robert Kostro, Director of the Polish History Museum (PHM), presented the origins of the revival of Jan Karski and his legacy, which was initiated by Ewa Wierzyńska, leader of the “Jan Karski. Unfinished Mission” program at the PHM and a director at Jan Karski Educational Foundation. Director Kostro said that the Karski narrative helps convey the history of occupied Poland during WWII and understand the context of Holocaust. Kostro also addressed the moral values represented by Karski, such as patriotism, sensitivity to the fate of others and tolerance. He also outlined key PHM initiatives, including the “The World Knew: Jan Karski's Mission for Humanity” exhibition presented in multiple language versions throughout the world, as well as Karski Days, Karski benches and the Google Institute online "virtual exhibition" about Karski.

A story of Karski’s life and work was vividly recounted by Andrzej Żbikowski, professor of history at the University of Warsaw Eastern Europe Studies program, researcher on Jewish matters and the author of a Karski biography. Żbikowski addressed the dangers associated with Karski’s mission to Warsaw Ghetto and transit camp, where he risked not only his own life but the lives of his Underground comrades.

Wojciech Białożyt, Executive Director at Fundacja Edukacyjna Jan Karskiego, presented the history and mission of the Foundations, as well as its main achievements and involvements, including the publications of Karski’s works, Story of a Secret State and The Great Powers and Poland, both in Poland and US, the organization of international conferences devoted to Karski, the issuance of Karski coins by the National Bank of Poland, dramatic reading Remember This: Walking with Jan Karski at Georgetown University, scholarship program and many other events and programs.

The last paper was presented by the Director of the Center for Polish-Russian Dialogue and Understanding, Sławomir Dębski, who talked about Rafal Lemkin and Jan Karski in the context of the “Responsibility to Protect” doctrine. He said that these two “heroes of humanity” represented the determination to prevent mass murder and contributed to a better understanding of the term genocide, which was coined by Lemkin.

During the following open discussion, Consul General of the Republic of Poland in New York, Ewa Junczyk-Ziomecka appealed to all present in the hall to get more young people involved in significant historical issues, such as the promotion of Jan Karski and his legacy.

During one of the afternoon sessions dealing with the destruction of Polish Jews from different perspectives – Polish, Israeli, American and German – Karski was referenced several times. Katrin Stoll from the German Historical Institute-Warsaw, presented a stimulating paper “Conscious Engagement and the Holocaust: Jan Karski as a Model for Coming to Terms with the Past in Germany,” in which she examined why Karski had been ignored in Germany for so many years and talked about him in the context of German memory culture – between remembering, repressing and denial.

The PIASA Congress was organized in partnership with the University of Warsaw, Polish History Museum, Polish Foreign Ministry, The Institute of National Remembrance and the Polish American Historical Association.

Detailed program of the PIASA Congress can be found here.