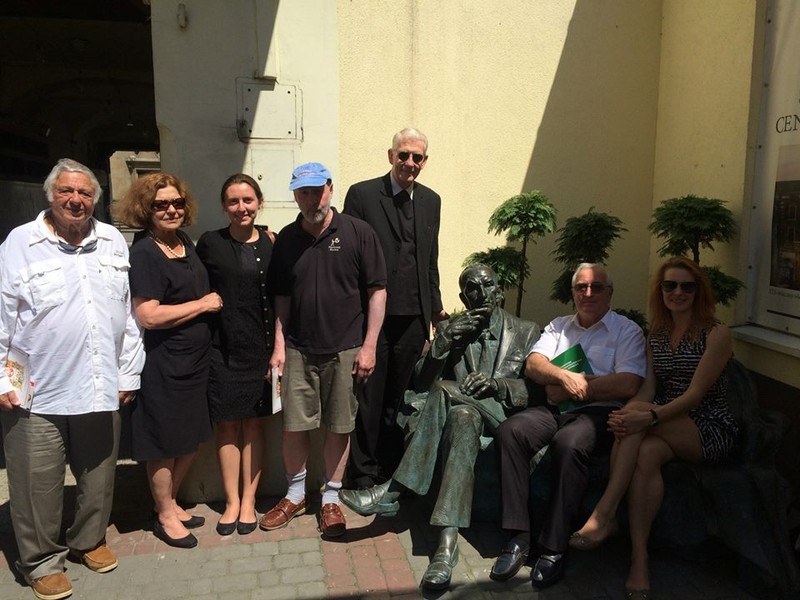 During their visit, the Georgetown delegation had an opportunity to meet with Polish scholars, politicians and leaders of several organizations which foster the Jewish-Christian relations, including the representatives of the Collegium Civitas, Paulina Codogni, Provost for International Cooperation and Maciej Kozłowski, former Polish Ambassador to Israel (currently a faculty member of the college). They also met with Paweł Machcewicz, Director of WWI Museum in Gdańsk and with Peter Święcicki, President of the Georgetown University Alumni Club in Poland, as well as the representatives from the POLIN Museum of the History of Polish Jews, Łucja Koch, Monika Koszycka and Małgorzata Paker of the Department of Education at the Museum. Barbara Kirshenblatt-Gimblett, Advisory to the Director of the POLIN Museum of the History of Polish Jews, curator of the permanent exhibit and board member of the Jewish Historical Institute was the delegation’s guide to the Museum.

In Kraków, they spoke with Professor Jolanta Ambrosewicz-Jacobs, Director of the Center of Holocaust Studies at the Jagiellonian University, Rabbi Avi Baumol at Center for Jewish Culture in Kraków, and Professor Aleksander Skotnicki at the Stradom Center for Dialogue in Kraków. In Auschwitz, they attended a meeting at the Centre for Dialogue and Prayer in Auschwitz with its Director, Rev. Jan Nowak, Rev. Manfred Deselaers, Rev. Łukasz Kamykowski, Director of the Institute of Ecumenism and Dialogue at the John Paul II Pontifical University, and Andrzej Kacorzyk and Marta Berecka of the International Center for Education about Auschwitz and the Holocaust.

In addition to the POLIN Museum of the History of Polish Jews in Warsaw, the delegation toured the Warsaw Uprising of 1944 Museum in Warsaw. The visit was organized by Fundacja Edukacyjna Jana Karskiego and Jan Karski Educational Foundation with financial support of the Polish Foreign Ministry, US Embassy in Poland and Polish Embassy in the US.