Tribute to Our Values 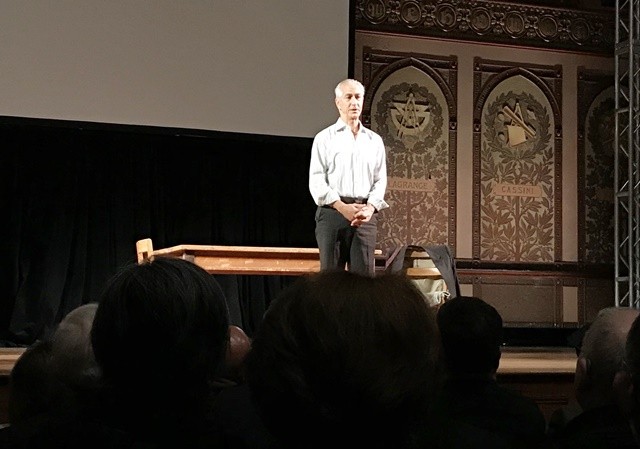 Considered to be one of the top international schools of higher education in the world, Georgetown University’s Edmund A. Walsh School of Foreign Service (SFS) celebrated its 100th anniversary with festivities that took place from November 14-17, 2019. Jan Karski was a distinguished professor at SFS for almost 40 years and the presence of his legacy was prominent during the celebrations.

That legacy was highlighted with a special event on Friday, November 15, that featured honorable guests and distinguished alumni of this prestigious school, including the 42nd President of the United States, Bill Clinton, and former US Secretary of State, Madeleine K. Albright. The Jan Karski Educational Foundation was represented by the Chair of the JKEF’s Board, Andrzej Rojek, members of the JKEF Board, Michał Mrożek (Georgetown University alumnus and Karski's student) and Krzysztof Zakrzewski, as well as the President of Fundacja Edukacyjna Jana Karskiego, Ewa Junczyk-Ziomecka and a member of the FEJK management, Paweł Wołkanowicz. The long-time supporter of our Foundation, Przemek Krych, was also in attendance.

Remarks by Secretary Albright and the Centennial Address delivered by President Clinton were the high points of the evening.

The Centennial weekend was accompanied by a special presentation of Remember This: The Lesson of Jan Karski, a play written by Clark Young and Derek Goldman, directed by Derek Goldman, and starring the Academy Award-nominated actor David Strathairn, on November 14 and 15.

Building on earlier versions of the play with Strathairn and a larger ensemble, developed by Georgetown University’s Laboratory for Global Performance and Politics and performed to acclaim in New York, Washington DC, Poland, and other sites, this new tour-de-force solo performance focused on the enduring lessons of Karski’s life—especially his belief in humanity, even in the darkest times—into the present moment. Through the whole creative process, the Jan Karski Educational Foundation JKEF has supported the development of the play.

The outstanding performance by David Strathairn at GU’s Gaston Hall moved those in the audience who knew Karski personally, while the current undertones of the play appealed especially to the GU students who asked thought-provoking questions during a Q&A with the artist and creators that followed the performance.

“The play was nothing short of a triumph,” noted the Dean of the Walsh School of Foreign Service, Joel Hellman, “It could not have set a more perfect foundation for the entire weekend, as it was such a moving tribute to our values, our history and our ambition to inspire the recommitment to our basic humanity that seems to be our only hope for the future these days. Not a soul walked out of Gaston unmoved.”

Related pictures: Tribute to Our Values