The Polish Predicament and Response in World War II 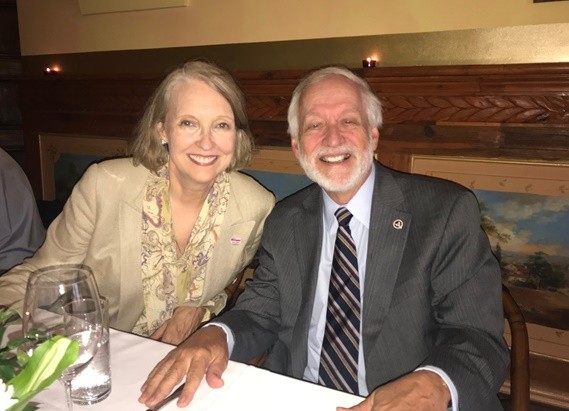 Warsaw, Poland – Wanda Urbanska, former president of the Jan Karski Educational Foundation, briefed a bipartisan group of former U.S. ambassadors on “The Polish Predicament and Response in World War II” on September 28, in advance of the group’s tour of the Rising ’44 Museum in the city. After a welcome and introduction by the Polish National Foundation’s Deputy Chairman, Robert Lubanski, Ms. Urbanska provided a contextual overview of what the Polish nation faced at the outset of and throughout World War II.

“When the facts are presented and understood about this complex, depressing but also inspiring history, it often results in a sense of amazement, as in, ‘How could have I missed this fundamental piece of world history?’” Ms. Urbanska said. She warned the ambassadors that a subset of those who learn about the Polish experience develop a “deep appreciation of what a remarkable, resilient and uncommon people the Poles are and may develop a form of Polonophilia.” She cited Oxford University historian Norman Davies, journalist Lynne Olson and Stanley Cloud (coauthors of “A Question of Honor”), and Allen Paul (author of “Katyn”) as examples of non-Poles who became fascinated with the country.

Co-organized by the Council of American Ambassadors, a group of non-career ambassadors, and the Polish National Foundation in Warsaw, the trip brought a distinguished delegation of former U.S. ambassadors to three countries: Estonia, Lithuania, and Poland.

“History seems to infuse the present in Poland,” remarked the Honorable Laurie S. Fulton, former ambassador to Denmark. “Wanda’s presentation and our visit to the Rising ’44 Museum made me realize how little I had previously comprehended about the complicated dynamics between the Nazis and Soviets as they battled for the domination and elimination of Poland.” She noted that the opportunity to move through the museum’s sanitized re-creation of Warsaw’s vital underground sewer system – minus the muck, sewage, and rats – provided “a hint of the necessary commitment” that drove members of the Resistance.

Ms. Urbanska described the sophistication, complexity, effectiveness, and size of the Polish Underground Resistance – the largest and most significant in occupied Europe – to the delegation, then shared accounts of three of its greatest heroes: Witold Pilecki, Irena Sendler, and Jan Karski.

The Honorable Timothy A. Chorba, President of the Council of American Ambassadors, was personally touched to hear the account of Jan Karski, whom he met while a student at Georgetown University decades ago. “Having narrowly escaped death in the Katyn Forest massacre, he risked his life and endured Gestapo torture to bring word of the Holocaust out to the West, where tragically it fell on deaf ears at the highest levels of government.”

Ambassador Fulton commented that it was hard to imagine “the utter disappointment” Karski must have felt “when his mission to convey eyewitness accounts to British and American leaders of the Nazi atrocities being committed against the Jews did not yield the aid or assistance he sought.”

The Jan Karski Educational Foundation provided each participant with a copy of its award-winning graphic novel, Karski’s Mission to Stop the Holocaust. After visiting the Rising ’44 Museum, the group boarded a bus for a late-night, behind-the-scenes visit to the Jasna Góra Monastery in Częstochowa to see the iconic Black Madonna. The group wrapped up the tour the following day by touring the historic city of Kraków.

The delegation was “moved by the depth of unimaginable destruction, suffering, and repression that were inflicted on Poland over the past century,” Ambassador Chorba said. “Despite its tragic history and extraordinary resilience, Poland seems to remain mystifyingly beleaguered from its west, as well as predictably threatened from its east. The country truly is a profile in courage.”