The Karski Boulevard and Chess for All 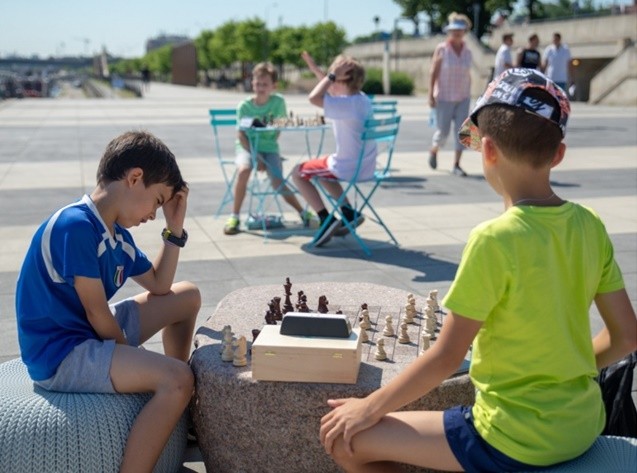 Kids Playing chess at the Karski Boulevard (Photo: Courtesy of the City of Warsaw)

Warsaw, Poland—On June 4, the “Wars and Sawa Are Playing Chess” project was opened with a chess-on-the-river event on the Karski Boulevard in Warsaw. On that day, dozens of elementary school students could be seen bending over chess boards and immersed into the game. Why there? Karski was a man of many passions and chess was one of them. He enjoyed the sophistication of this ancient game, which requires such gifts as excellent memory, analytical skills, as well as the ability to plan, take risks, and think strategically—the qualities that Karski undoubtedly demonstrated on many occasions during his famous escapes from captivity and daring missions undertaken for the Polish Underground.

“Experience from other cities and countries show that chess-on-the-river is very popular. Now, Warsaw will join in,” said Włodzimierz Paszyński, Vice-President of the City of Warsaw—the organizer of the project—during the opening event.

Also present was Deputy Director of the Education Bureau of the City of Warsaw, Mirosław Sielatycki, who recognized The Polish Chess Association and Fundacja Edukacyjna Jana Karskiego as partners of the initiative.

“I am pleased that the City keeps up the memory of the extraordinary Pole, Jan Karski, and highlights the connection between the boulevards and their patron,” said Ewa Junczyk-Ziomecka, President of Fundacja Edukacyjna Jana Karskiego, the Jan Karski Educational Foundation’s sister organization.

The event was organized by the City of Warsaw to encourage people to spend time in a creative and technology-free way in the tranquil atmosphere of the banks of the Vistula River. Everybody is invited: the young and old, individual players and families, the Varsovians and the tourists. The chess boards have been engraved on stone tables. Chairs and chess pieces can be rented at the tourist information kiosk (until September 30). The project will include chess tournaments and games.

In 2012, the European Parliament recommended chess be included in schools of all EU members. “Wars and Sawa Are Playing Chess” is the biggest educational project in Poland, currently running in 133 elementary schools in Warsaw—60 percent of all schools in the city—and also includes workshops for teachers. Its purpose is to develop concentration skills, patience, and endurance in the students, in addition to creativity, memory, and analytical thinking.

Related pictures: The Karski Boulevard and Chess for All