Students Inspired by the Heroic Story of Jan Karski 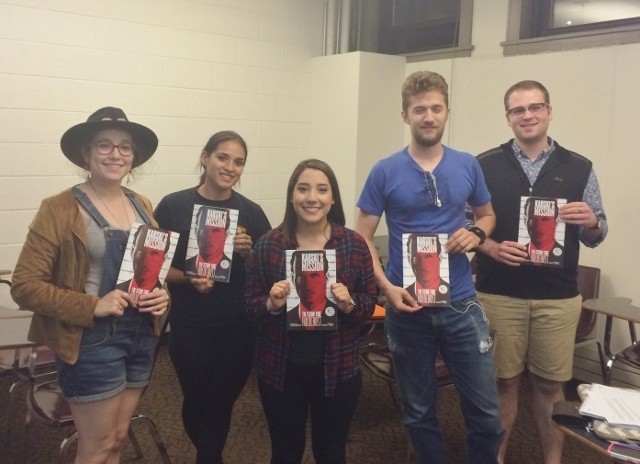 The Loyola University Chicago has long been known for advocating greater understanding of the history of World War II and has led initiatives promoting Jan Karski, including the Jan Karski 2014 International Conference on Memory and Responsibility, organized in cooperation with the Jan Karski Educational Foundation.

Recently, Dr. John Merchant, Lecturer in Polish, Irish, and Polish American Literature at Loyola University, has introduced the graphic novel Karski’s Mission: To Stop the Holocaust to his students taking LITR 200 European Masterpieces: Literature in Film (WWII) class at LUC. Here are the comments written by the students after reading the book.

“In Karski’s Mission: To Stop the Holocaust, written by Rafael Medoff and illustrated by Dean Motter, the journey of Jan Karski, a Polish emissary, takes place in a Nazi occupied Poland. Throughout the artistic comic, the readers are able to grasp the hardships that Karski endured in order to fully understand and witness what was happening in the Jewish Ghettos and the overall anti-Semitism during World War II. Karski’s journey was troublesome and a fight for survival. At one point in the comic, Karski is nearly beaten to death when caught by German soldiers and he still held his honor. Not only did Karski had to have the guilt of people being killed over him in order to protect him, but his sense of “failure” when the government officials of other countries ignored his plea and truth. I was astounded and shocked when these government officials from all different ranks merely brushed off Karski’s testimony. The fact that these people would simply ignore such a tragic outcry for help is utterly preposterous. Karski was the voice of those suffering in the ghettos and the concentration camps and yet no one listened. Jan Karski is a hero for telling the horrific but honest truth of what the Nazi Germans were doing to the Jewish nation. Even after his ‘failure’ of not being taken seriously by government officials, Karski continued to speak of his journey and testimony well after the war. Karski’s Mission: To Stop the Holocaust is inspiring, empowering, and heroic.” —Jessica Realzola

“Jan Karski, born Jan Kozielewski, started his fight for Poland as an army officer.  A month after his capture, he makes a daring escape and makes his way back home. He discovers the atrocities the Nazi Germans are committing on the Jewish population in Poland, and joins the Polish underground in an effort to warn Western leaders of the Holocaust in an effort to end it.  Through a series of clever disguises and committed networking, Karski finds himself in the Western Capitals of London and Washington D.C., only to fall upon deaf ears.  Karski turns to literature to spread the word about the atrocities and becomes successful as an author and then as a professor, after the war.  In the 1970’s Karski is interviewed about his wartime experiences, finally giving him closure to what he believes is his own failure of diplomacy.

Karski’s story is parallel to the history of 1940’s Poland, because Karski personally witnesses the attacks of the Germans upon the Polish and the Jewish peoples, he experiences the stinging, cold indifference of the Western powers’ view of the struggles of Poland, and finally the guilt the Polish nation had on its own failure to protect her own citizens, the Jews.  Karski, through selfless acts far exceeding the call of duty to the motherland, risks life and blood of his own family members and friends to adhere to the virtues that he believes in: God, in that all people of God are equal and must be protected, honor, or honor of the memories of those brutally fallen by the hand of the invading German army, and of motherland, because in his eyes all citizens of Poland belonged to the motherland.  The final tale of this story is the destruction of indifference against such an evil, as unfortunately the dreams of a united Poland and survival of the Polish Jews were just a dream of Karski’s.”— Lex Papaioannou

“When reading the comic Karski's Mission, I was in suspense throughout the whole book. I really enjoyed how the creator of this comic mentioned Karski's life before the war. It made him more relatable and allowed us to imagine ourselves in his position. He was a man with great ambitions just like any young adult would be after graduating from a university. I thought it was creative how the comic used color to show the reader what was important. Red was constantly used to capture a reader's attention and this for me was effective. I found myself dwelling on the pictures that had red in it more than other pictures just because they stood out. After reading about Karski's life myself, I personally feel this comic accurately tells his story. […] This comic effectively showed he was a man who fought for what he believed in and risked his life multiple times so that others may have the opportunity to survive the war. Overall, I really enjoyed the comic and thought it was a creative way to tell a person's biography. This is definitely an effective way to get the younger population interested in reading about the important people who have had an impact on society.”—Karyna Bravo

“Previously one that held comics in contempt, the illustrated story of Jan Karski forever transformed the way in which I approach alternative forms of literature. The Jan Karski Educational Foundation published the work with the text by Dr. Rafael Medoff and illustrations by Dean Motter. Taking a multifaceted narrative and transforming it into a few dozen pages of drawing and blurbs of text is no forgettable feat. Facing the challenge of overlooking a critical detail of Karski’s life, the book is able to brilliantly relay the story of Karski’s heroic actions aimed at exposing the Holocaust. The comic focuses on key events that lead to Karski’s entering of the ghetto and transit camp in order to reveal to Western leaders the happenings inside these respective hells and his pleas for some action to be taken. Though his words were not immediately heard and Karski is devastated with pangs of defeat, the comic helps the reader to understand Karski’s resilience, bravery, and determination even though Karski may not immediately have seen these things himself.

Never would I have imagined that in so few words and in so few pages I would enter into a world that would forever provide me with a snapshot of Karski’s world. Though I do not carry with me a photographic memory of Karski, I am grateful to the Foundation and all involved with this publication for allowing me the honor to better know and celebrate the life, actions, and motives of such a true hero.”—Dalton Scott Day

To order the book, please contact the Jan Karski Educational Foundation at info@jankarski.net.

Texts have been slightly edited for space and clarity.