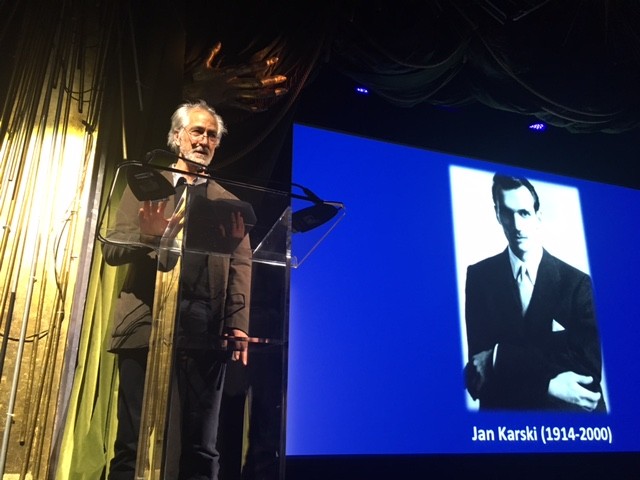 New York, NY— The Fellowships at Auschwitz for the Study of Professional Ethics (FASPE), an international program that addresses contemporary ethical issues that professionals face, presented its 2017 FASPE Ethical Leadership Award to Jan Karski, posthumously, on January 30. Andrzej Rojek, Chairman of the Board of the Jan Karski Educational Foundation (JKEF), accepted the Award on behalf of Jan Karski. This honor reflects FASPE’s mission to distinguish individuals who displayed exceptional ethical courage in fighting Nazi tyranny and murder during World War II.

The FASPE Ethical Leadership Award honored Karski for his efforts to disseminate information about Nazi activities in Nazi Germany occupied Poland to Allied Leaders in London and Washington. David Goldman, founder of FASPE, commented that “FASPE recognizes that the professionals, including government officials [and] diplomats within the German Government, played a leading role in the events in Nazi Germany that led to the Holocaust. With this award, FASPE recognizes individuals who, instead, used their professions honorably during World War II. We are particularly proud to honor one of the world’s great examples of courage and ethical clarity in the face of evil and personal danger.”

The event gathered many notables including the Consul General of the Republic of Poland of the Polish Consulate in New York, Maciej Golubiewski; Ewa Junczyk-Ziomecka, President of Fundacja Edukacyjna Jana Karskiego (JKEF’s sister organization in Warsaw); members of JKEF’s Board: Maciej Dyjas, Przemyslaw Krych and Ygal Ozehov; Marek Skulimowski, President of the Kosciuszko Foundation; and Anthony Kronman, Sterling Professor of Law at Yale and former Dean of Yale Law School.

David Strathairn, an Academy Award-nominated actor, who portrays Karski in a stage production “My Report to the World” introduced Karski to the audience, talking at length about Karski’s mission during WWII and his message, which fell on deaf ears. “Why that happened” Strathairn continued, “is perhaps a conversation for another time, though I believe that in the spirit of Jan Karski it behooves us all to think seriously about the ramifications that such ‘deafness’ might yet again have upon our world.”

“Had Karski been here, standing in front of you, he probably would have been denying any credits and accomplishments of his, emphasizing the work of others in educating the world on living ethically. Karski was not about awards and big events, more about fighting for the truth and moral standards, both of ordinary citizens and politicians attempting to control our lives. Karski would probably have been very wary over the current state of affairs in the world. He would not have understood the news, alternative facts, fake news and news about fake news. The everyday media noise is deafening and deeply confusing. We are told that the era of globalism is over and that the new age of populism is upon us. So be it. But where is it said that the fundamental rules of human interaction are to be broken? Why is it that compassion is not to be practiced anymore? Why is the rule of law questioned and fundamental civic institutions banned from societies? Why are newly established democracies abandoned by the global superpowers? What Karski would have stood for and what FASPE is attempting to do is to provide a solid guideline on how to live today. I guess the moral choices during Karski times were so much easier - the good and evil now may not be so obvious or transparent. Yet, with all your help we shall be able to educate next generations of lawyers, clergymen, journalists, doctors and businessmen on how to live in these difficult times.”

In recognizing Jan Karski, David Goldman wrote a powerful article on the current implications of the Karski legacy.

Founded in 2009, FASPE is an independent non-profit organization that provides an innovative set of programs for professional school students preparing for careers in business, law, medicine, journalism and the clergy. FASPE immerses students in history by taking them to the sites where Nazi-era executives, doctors, lawyers, journalists and clergy worked, and where the consequences of their actions unfolded. It invokes the power of place as a pedagogical tool to emphasize the importance of ethical behavior among professionals today.