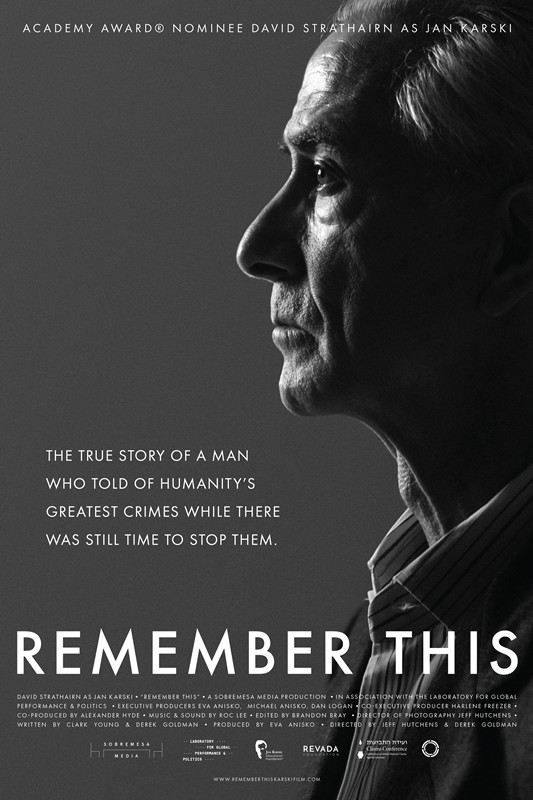 The award-winning feature film Remember This, starring Academy Award nominee David Strathairn as Jan Karski, will open at Landmark’s Quad Cinema in New York on January 27, 2023 – which marks International Holocaust Remembrance Day – and then at Laemmle’s Monica Film Center in Santa Monica, CA, on February 3. The release will be followed by select theatrical bookings across North America, including Chicago, Boston, Atlanta, DC, and other cities, as well as film festivals, and a PBS broadcast on March 13.  Here is the full upcoming lineup:

The movie tells a story of a World War II hero and Holocaust witness, Jan Karski, a Polish Catholic, who, after surviving the devastation of the Blitzkrieg, swore allegiance to the Polish Underground and risked his life to carry the first eyewitness report of the Holocaust to the Western world, and ultimately to the White House. Escaping a Gestapo prison, bearing witness to the despair of the Warsaw Ghetto, and confronted by the inhumanity of a death camp, Karski endured unspeakable mental anguish and physical torture to stand tall in the halls of power and speak the truth.

Based on the original stage production Remember This: The Lesson of Jan Karski, written by Clark Young and Derek Goldman and created by The Laboratory for Global Performance and Politics at Georgetown University, the movie was directed by Derek Goldman and Jeff Hutchens (also director of photography) and produced by Eva Anisko. It recently won Audience Awards at the Woodstock and Montclair Film Festivals and the Boston Jewish Film Festival.

For more information, go to the Remember This website.

Abramorma is the owner of the movie distribution rights for North America.