Jan Karski featured in the Ken Burns PBS series, with footage and audio originally from the documentary Shoah

Ken Burns has been making documentaries, mostly for PBS, since the early 1990s, most notably The Civil War, The National Parks: America's Best Idea, and The Roosevelts. His Florentine production company’s films have been nominated for Academy Awards and have won several Emmys. The documentaries have been very influential in examining various topics, primarily historical in nature.

In September 2022, PBS premiered Florentine’s latest effort, called The U.S. and the Holocaust. Shown over three nights, it focused on America during the Holocaust, examining whether anything could have been done to prevent the slaughter of the Jews and what Americans knew as it was underway. It offered a historical perspective on topics such as eugenics and America’s Jim Crow laws, which made Black people second-class citizens and which Hitler would model when creating his own racial laws.

The films attempted a balanced set of viewpoints on many questions. For example, in response to the contention that the Allies could have bombed the railroad tracks leading to concentration camps, it was pointed out that at the beginning of the war, there were no air bases close enough to do so on one tank of fuel. Additionally, the Germans would have been able to replace damaged tracks overnight. Later in the war, the inaccuracy of the bombing might have led to more deaths in the camps, while the American public might not have been in favor of the loss of their pilots for such a cause. 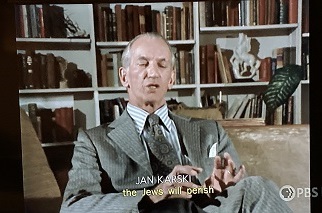 Jan Karski was featured in the third part of the series. In his own words (presented as excerpts from Claude Lanzmann’s documentary Shoah), Karski described his meetings with President Franklin D. Roosevelt and Supreme Court Justice Felix Frankfurter, and how he told them of the situation in Nazi-occupied Poland, particularly the plight of the Jews. Justice Frankfurter, Jewish himself, was unable to believe Karski's information. Roosevelt indicated that winning the war was his priority. 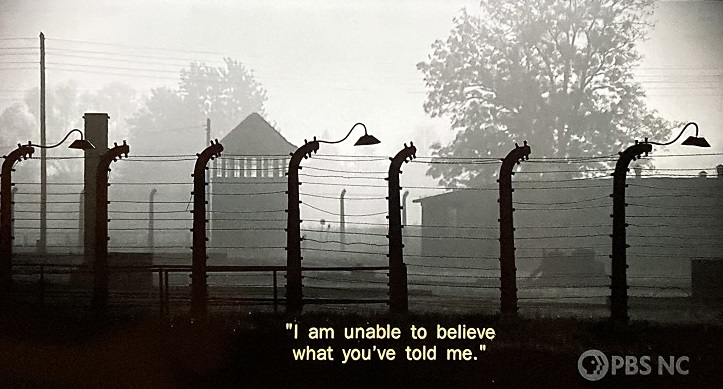 Despite the influx of proof, there was significant inaction, partly due to bias in government agencies and partly due to the ongoing Great Depression, causing fear that American jobs would be lost to refugees. For these reasons, the American media often deliberately downplayed or even suppressed the news regarding the Holocaust. The antisemitic climate in America was shown in a chilling scene of Nazis in Madison Square Garden and videos of religious leaders who disparaged the Jews.

The documentary clearly showed that the contention that Americans weren’t aware of the plight of the Jews in occupied Europe was false. Although not mentioned in the documentary, Karski’s book about the situation in Poland, Story of a Secret State, was published in 1944 and became a best-seller. Karski then did an extensive speaking tour throughout the United States and Canada.

The documentary noted that U.S. let in more Jewish refugees than any other country‌ and established the War Refugee Board in January 1944, which saved several hundred thousand people. Advocates like Karski attempted to stem the tide of the slaughter, but it wasn’t enough. Some diplomats were also able to save Jews and others targeted by the Nazis by providing false documentation. Nevertheless, an estimated two-thirds of Europe’s Jews perished in the Holocaust.

The series will be available for purchase (starting October 4, 2022): https://shop.pbs.org/WE4502.html?utm_source=PBS&utm_medium=Link&utm_campaign=pbs_content_kenburns_usandholocaust_buydvdtopnav