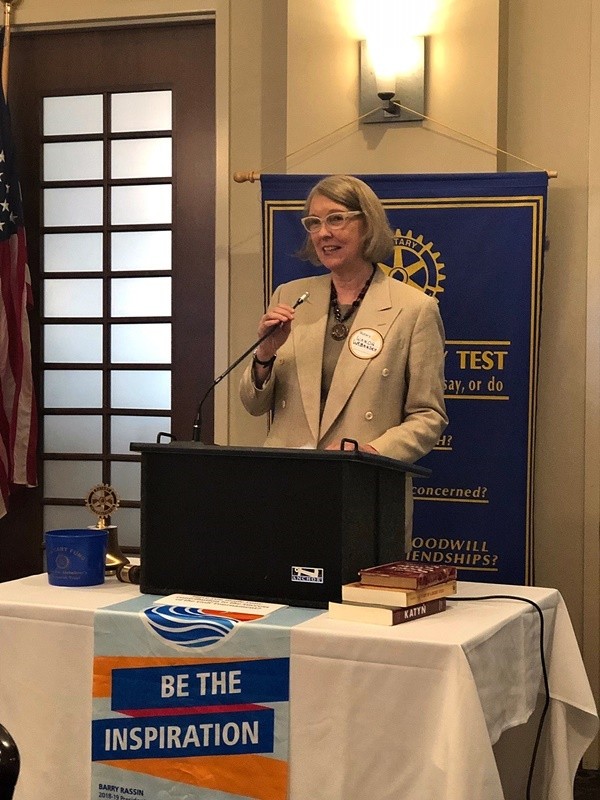 Members of three civic clubs in North Carolina recently learned about the remarkable legacy of Jan Karski in presentations given by Wanda Urbanska, former president of the Jan Karski Educational Foundation. The majority of attendees said that they’d never before heard about Karski nor about his work for the Polish Underground and the Allies during World War II.

“The audiences were mesmerized by Wanda’s presentations,” remarked Ann L. Vaughn about the two programs that were given in Mount Airy on May 7 – one at noon for the Mount Airy Rotary Club and the other in the evening for the Mount Airy Kiwanis Club. “The story of Jan Karski is so powerful and compelling,” Vaughn said, “and everyone was eager to hear about the next heroic adventure Karski was willing to undertake for his beloved Poland.”

The first of the three Karski presentations was for the West Raleigh Rotary Club and took place to a packed house on Friday, May 3, at North Carolina State University Club. President George Wilson welcomed the 22 guests who came out for the program, forcing the meeting to move to a larger room.

In a nod to the turn-out, Ms. Urbanska quipped, “Your club needs to have more programs about Polish history. And we can help with that!”

The audience included such dignitaries as Allen Paul, author of Katyn: Stalin’s Massacre and the Triumph of Truth; Raleigh attorney Mack Paul who played an instrumental role in the success of the 2012 Jan Karski US Centennial Campaign; Rich Pond, Chief Marketing Officer for Prescient, a Durham-based building information modeling company; and Mariola Kopcinski, president of the Polish American Club of the Triangle.

A slide in the presentation titled “Local Heroes” acknowledged the roles played by Allen Paul and Mack Paul in the Campaign (which operated until the Jan Karski Educational Foundation was formed in 2013). “Allen Paul served as every member of our kitchen cabinet – he was our advisor, door opener and idea generator,” said Urbanska, who led the Campaign together with Campaign Chairman Andrzej Rojek. “Allen’s son Mack wrote a crucial email in November 2011 to his friend Pete Rouse, then chief of staff in the White House, stating that Karski was a worthy nominee for the Presidential Medal of Freedom—this highest of civilian honors—and asked how the nomination could be submitted.”

Rouse’s response was terse: “‘She has two weeks.’” That was the “hardest stretch of my career,” Urbanska recalled. “Without the involvement of the Paul family, I wonder if we would have achieved success so quickly.” President Obama conferred the posthumous Medal on Karski on May 29, 2012, in a White House ceremony.

In addition to the behind-the-scenes account of the Presidential Medal Campaign, audience members were fascinated by Karski’s many disguises: as a Jew when entering the Warsaw Jewish Ghetto; as a Ukrainian guard at Izbicza Lubelska; and as a French contract worker when he smuggled himself out of occupied Poland in 1942 to share his eyewitness accounts with leaders in the West. “Because his weak French could blow his cover,” Urbanska said, “Karski was injected by a dentist assigned by the Polish Underground with the equivalent of novocaine so with swollen mouth and jaw he could only mumble when asked for documents when he was on the train.”

After the last of the three presentations, Steve Lowe, past president of the Mount Airy Kiwanis Club, asked how his club could help the Karski Foundation.

“The answer is education,” Ms. Urbanska responded, challenging the Kiwanians to introduce the Karski legacy into classrooms in Mount Airy and Surry County through the foundation’s award-winning graphic novel, Karski’s Mission to Stop the Holocaust.

“When will a movie about Karski be made?” chimed in another Kiwanian. “That will surely get the attention of young people!”