"Friend in the White House"? 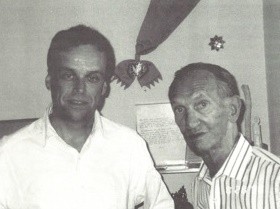 Davis, CA—Jan Karski is close to becoming a household name thanks to many prominent people who have been inspired by his story and make every effort to disseminate the Karski legacy. The latest is Andrew Nagorski—an award-winning journalist and author, who spent more than three decades as a foreign correspondent and editor for Newsweek. On April 30, he spoke on behalf of the Jan Karski Educational Foundation at the University of California Davis to a group of nearly 300 students, participants of the Holocaust class taught by the Emanuel Ringelblum Distinguished Professor UC Davis, David Biale.

Mr. Nagorski started off by talking about Hitler’s early skepticism towards the Jews and then, the invasion of the Soviet Union in 1941, which coincided with the launch of mass killings. He went on to discuss the main premises of the book he has just finished, 1941: The Year Germany Lost the War (to be published on June 4): the decisive character of the year 1941—for both the war and the Holocaust—when Hitler’s missteps and policy of terror pushed the creation of a new alliance to defeat Nazi Germany.

Mr. Nagorski then talked about Karski, his work in the resistance, his secret visit to the ghetto and a transit camp, and his mission to the West. Nagorski, who has met Karski in person and interviewed him twice, cited the conversation they had about Karski’s visit to the White House:

After US President F. D. Roosevelt summoned Karski on July 28, 1943, and they discussed the situation in the Nazi-Germany occupied Poland at length, the Polish emissary said: “Mr. President, a distinction has to be made. The Germans persecute my people, they deny us education, send us to concentration camps, they want to make us a nation of slaves. With the Jews, it is different. They want to exterminate them.” FDR did not respond to this statement but continued asking questions, definitely not interested in pursuing the subject. At the end of their meeting, Karski asked what message he should take with him back to Poland, and FDR replied: “You will tell the leaders that we shall win this war! You will tell them that the guilty will be punished. Justice and freedom shall prevail. You will tell your nation that they have a friend in this house.”

Students were very attentive and asked good questions about Hitler’s policies and behavior in 1941.

Please see this story, where you can find links to Andrew Nagorski’s interviews with Jan Karski: https://www.jankarski.net/en/news/it-was-war-it-was-normal.html

We would like to thank Professor Biale and the University of California Davis for organizing this event. Andrew Nagorski and David Biale contributed to this report.

Visit Andrew Nagorski’s website for information about his achievements and publications.