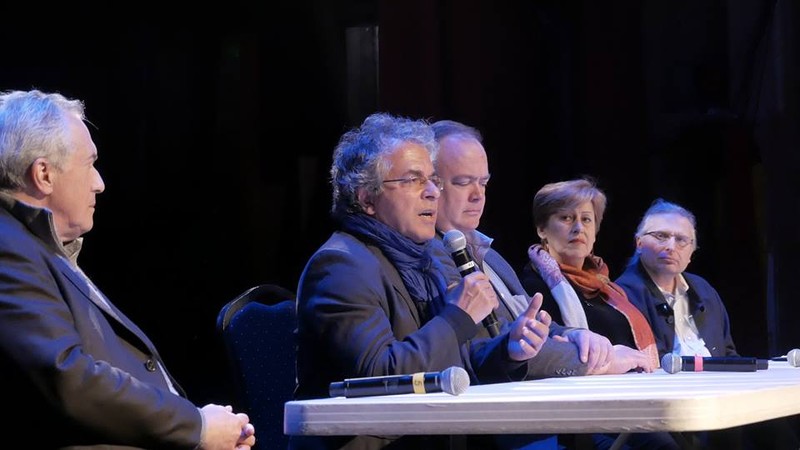 Chicago – Karski and The Lords of Humanity is continuing its successful US and international tour. This documentary about Karski and his mission to alert the Western leaders about the ongoing mass murder of the Jews in the Nazi occupied Poland has been extremely well received worldwide and is scheduled to be shown in many more American cities. Recently, it was presented in Chicago in connection with the Third International Polish Jewish Studies Workshop organized by the University of Illinois at Chicago, which opened on April 10 with an event hosted at the Loyola University downtown campus by Bozena Nowicka McLees, Director of the Interdisciplinary Program in Polish Studies at Loyola University Chicago (see link to the report from the conference below).

The Copernicus Center hosted its presentation on April 8, along with a panel discussion with the film’s director, Emmy Award winner Sławomir Grünberg, in conversation with Andrzej Rojek, Chair of the Board of the Jan Karski Educational Foundation; E. Thomas Wood, author of Karski’s biography, Jan Karski: How One Man Tried to Stop the Holocaust; Bożena Nowicka McLees, Head of the Polish Studies Program at Loyola University Chicago; and film critic Zbigniew Banaś of Loyola University.

When asked about Karski’s motives, Mr. Wood said: “I don’t think Professor Karski had any illusions about what he might accomplish. He always insisted, privately and publicly, that he was simply doing his duty – as a Pole, as a Christian, and as a human being. He would have learned as a child from the Jesuit fathers that despair, in Roman Catholic doctrine, is a mortal sin. He could not let the bleakness of his hopes lead him into passivity in the face of evil.”

Mr. Banaś provided this commentary: "Sławomir Grünberg’s documentary Karski and the Lords of Humanity presents an engaging, multifaceted portrait of the legendary Polish resistance fighter who tirelessly tried to open the eyes of the world to the atrocities perpetrated by the Nazis during World War II.  Grünberg deftly combines documentary footage of Karski’s recollection of these events with other interviews, old photographs, and even animated sequences to create a cohesive and persuasive account of how the leaders of the most powerful nations chose to remain deaf to his pleas for an urgent intervention.  The nature of this documentary forcefully emphasizes the contrast between Karski’s selfless efforts and the indifference of those who were in a position to affect meaningful change."

One of the questions from the audience pertained to the striking archival footage of the death and deprivation at the Warsaw Ghetto and the director’s decision to include so many graphic, sometimes disturbing, images. Grünberg explained that he wanted to shake the audience and to make them realize that this was an everyday reality for people who lived there. The film combines such archival footage from WWII, excerpts from other documentaries about Karski and interviews with people who knew him, with animated rendering of Karski’s undertakings, including his diplomatic missions, arrest, escape and conversations with Western leaders. During an after-show conversation, a woman who identified herself as a third-generation Pole and as having been deeply moved by the film, said that these animated segments provided much needed relief from the distressing photos of the humiliation, poverty and death presented in the archival footage.

On April 10, the film was shown at the Illinois Holocaust Museum and Education Center (IHM&EC) in Skokie, at a sold-out screening. In his introductory remarks, Sam Harris, President Emeritus of the IHM&ED and member of the Board of Directors, called Karski an “upstander.” Consul Konrad Zieliński of the Consulate General of the Republic of Poland said in his remarks that knowing history helps to avoid creating pre-conceptions and a black-and-white image of the past. The audience was visibly moved and stirred by the movie.

A Q&A session with the film director followed the presentation. Sławomir Grünberg talked about the process of obtaining the archival footage: these films were made by Nazi German soldiers and were to be used for their records as well as for anti-Semitic propaganda. Ironically, the producers of Karski & The Lords of Humanity had to pay thousands of dollars for the rights to use these films in the documentary. Mr. Grünberg also talked about the incredible reception that the film received in Russia, where it is seen as a pro-democracy voice and where Karski is perceived as a hero who stands against a tyrant.

The Jan Karski Educational Foundation is a co-sponsor of the film's US distribution.

Full program of the conference with a list of all organizers and sponsors:  pjsw-program.pdf

More information about the film

The movie’s success in Russia

JKEF Calendar with the upcoming screenings of the documentary