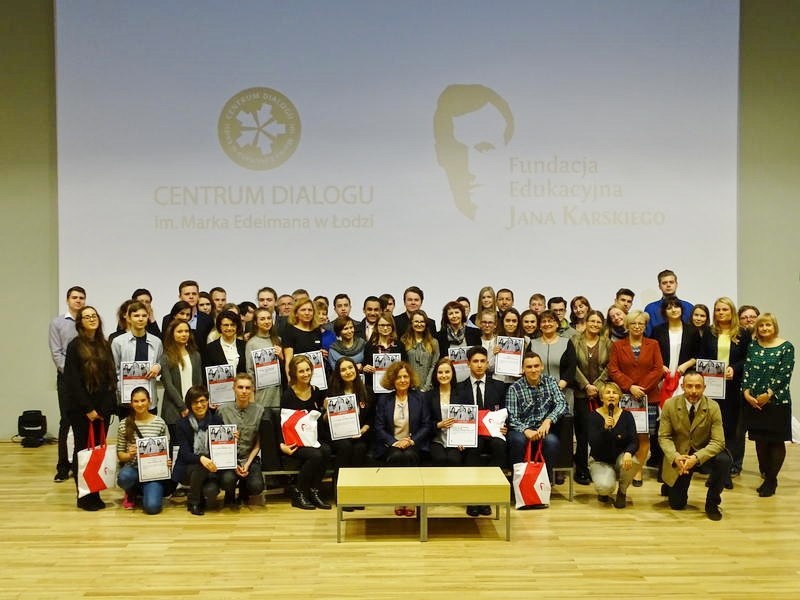 Łódź, Poland – The promotion of the “Karski My Hero” project was the focus of the special event celebrating the 102th anniversary of Jan Karski's birth. It took place on April 24 in Karski’s hometown, Łódź, and was organized by Fundacja Edukacyjna Jana Karskiego (FEJK), the Jan Karski Educational Foundation’s sister organization, in cooperation with The Marek Edelman Dialogue Center. Students from over 30 high schools in Łódź and its vicinity were invited to participate.

During the event, Ewa Junczyk-Ziomecka, President of FEJK and Joanna Podolska, Director of The Marek Edelman Dialogue Center presented students with copies of Karski’s Story of a Secret State, the newly published illustrated story Karski’s Mission: To Stop the Holocaust, an educational packet “Jan Karski: Humanity’s Hero,” as well as other materials promoting Karski and history in general. The screening of the Karski documentary by Sławomir Grünberg, Karski and The Lords of Humanity, and a performance by Oskar Śliwiński, who presented his rap about Karski, were part of the celebration.

The main goal of the “Karski My Hero” project is to promote the values of courage, responsibility, respect for human dignity and inter-cultural dialogue as exemplified by the deeds of Jan Karski. The project, addressed to students of schools from around the country, was launched in Poland in December, 2015, and will run through the whole year of 2016. It is part of the national educational campaign to encourage young people to engage in meaningful reading.

Karski’s wartime memoir Story of a Secret State perfectly fits this criteria – not only is it a well-written book but it also presents young readers with an excellent role model. It shows the realities of WWII through the eyes of a young man who demonstrated incredible acts of courage and moral stamina. The illustrated story, on the other hand, offers a fast-paced narration and engaging illustrations and serves as an effective tool to help students learn about Karski, as well as getting them interested in European history and the Holocaust in particular. It can also serve as an excellent introduction to the Story of a Secret State.

Schools which participate in the project form a Jan Karski Schools League and will receive FEJK’s special patronage. In return, the schools will organize their own Jan Karski’s Day and will provide a report to be posted on the Foundation’s website and promotional materials.

Special thanks go to Joanna Podolska, Director of The Marek Edelman Dialogue Center and Szymon Pawlak for the dynamic partnership in creating the “Karski My Hero” project.