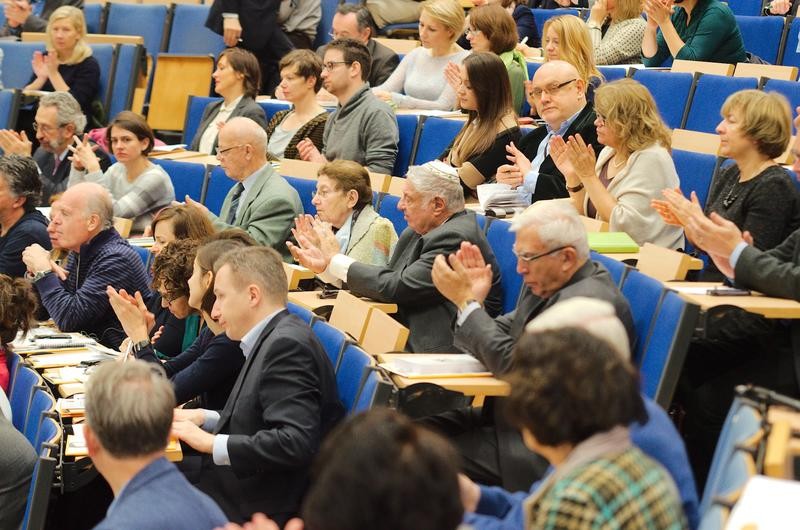 Warsaw, Poland - The two-day conference Jan Karski: Memory and Responsibility held on November 5 and 6 at the Old Library Building on the campus of the University of Warsaw gathered an impressive group of scholars, political leaders, journalists and filmmakers to tackle numerous difficult themes including: Christians and the Holocaust; the evolution of Polish identity; and overcoming the taboo in Polish culture about the Holocaust.

The first panel, Jan Karski: The Unfinished Mission of a Moral Man in Immoral Times, kicked off with US Ambassador to Poland Stephen D. Mull’s remembrance of taking a class from Karski at Georgetown University in 1978. The first Pole he ever met, Karski was Mull’s “favorite professor... exotically dressed, modest and lecturing with passion. None of us knew what he had experienced.” Mull's connection with Karski proved a very auspicious start with “my alliance with Poland,” he said.

Historian and former Polish diplomat Maciej Kozlowski, who first met Karski in 1986, was struck by the great man’s pessimism about “what he didn’t do.” Kozlowski said that Karski's mission was actually “his long life and, indeed, it was successful.”

“Memory. Responsibility: we’re not good at either,” commented British producer-director Martin Smith. “Even Karski got some details wrong.” Smith was one of the designers of the US Holocaust Memorial Museum’s permanent exhibition in Washington DC and also executive producer of the nine-part series, Struggles for Poland, as well as the 1985 stand-alone interview special with Jan Karski. Smith challenged the audience to look at the level of barbarism and murder in the world throughout history – from America's massacre of the Native Americans to Hitler's genocide of the Jews and brutal murder of other undesirables and many more. “We should no longer be shocked that Karski’s message about the Shoah was ignored”

Historian Robert Kostro, director of the Polish History Museum, chaired the panel, The Memories of Totalitarianisms: Asymmetry of Memory, East and West, which featured papers from Professor Heiko Paabo, a political scientist from University of Tartu in Estonia; Professor Jan Kubik, a political scientist from Rutgers University in New Jersey; and Professor Andrzej Nowak, an historian with Jagiellonian University, Krakow. Professor Pieter Lagrou, a historian at the Universite Libre de Bruxelles, just the month before had brought 45 students to visit Warsaw and Gdansk. He lamented the on-going prejudice that Poles continue to face in the EU and elsewhere but gave the country high marks for the self-examination that’s taken place in the last 25 years. “No other country has invested so much (as Poland) in dealing with the past.”

The conference was organized by the Jan Karski Educational Foundation and the Polish History Museum. Institutional partners included The Ministry of Culture and National Heritage of the Republic of Poland; the Ministry of Foreign Affairs; Warsaw University; and the United States Embassy in Warsaw. Strategic partners included Orange and Google Cultural Institute. Grupa Ergis was a partner. Media parters included Polskie Radio; TVP; Gazeta Wyborcza and Rzeczpospolita.

The exhibition The World Knew: Jan Karski’s Mission for Humanity was on display at the Warsaw University campus outside the conference building.