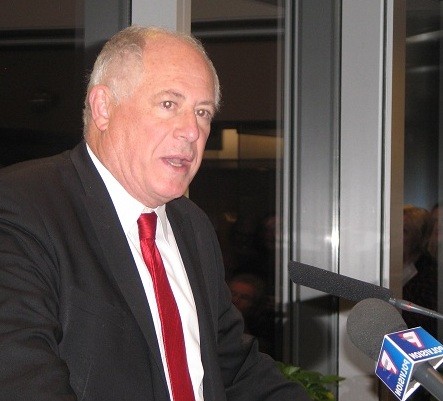 Illinois Governor Pat Quinn spoke at the launch of the Jan Karski Educational Foundation on November 12, 2012 at the offices of Baker & McKenzie in Chicago. “Karski led a life of courage, tolerance and heroism, and showed how each of us can make a difference,” said Quinn, who was a student of Dr. Karski’s at Georgetown University.

The Jan Karski Educational Foundation grew out of the successful Jan Karski US Centennial Campaign which, on May 29, 2012, reached its goal of obtaining a Presidential Medal of Freedom for the late Jan Karski. On that date, the posthumous award was conferred on the Polish Underground hero by President Obama at a White House ceremony. Quinn remembered Dr. Karski as “a great teacher, popular with students,” and he mentioned the accomplishments that earned Dr. Karski the Medal. Jan Karski was one of the first people to penetrate the Warsaw Jewish ghetto during World War II, risking his life to alert the Allies about what was happening in the Nazi concentration camps in occupied Poland. Quinn said he hoped the new foundation would spread Dr. Karski’s message of “tolerance and service” to new generations of Americans.

Dr. Karski’s book Story of a Secret State, which was first published in the U.S. in 1944, demonstrates what the Allies knew about the Holocaust when there was still time to act and the account reads like a spy thriller; it’s all the more remarkable for being true.

Through educational programs and outreach, the foundation seeks to honor the Karski legacy by perpetuating his values: courage in the face of adversity, tolerance toward all people, and speaking truth to power,” said foundation President Wanda Urbanska. The Foundation Board of Directors will focus on educating Americans–especially the youth–by promoting Story of a Secret State as a must-read in Holocaust, world and European history curriculums for students, starting with middle school.

The foundation will also cooperate with other institutions and organizations–among them the Polish History Museum in Warsaw, Loyola University, Georgetown University, American Jewish Committee, Anti-Defamation League, the Polish Museum of America, the Kosciuszko Foundation, and the Polish American Librarians Association, and others–to promote Karski’s legacy and to advance interfaith dialogue, especially between the Catholic and Jewish communities.

Representatives from a number of Jewish organizations participated in the launch event, including Jon Levine of the American Jewish Committee, who described Dr. Karski with the Yiddish word “mensch,” that is, “an entirely decent human being, and you can’t say anything better about a person.” Poland’s New York Consul General Ewa Junczyk-Ziomecka noted that Karski considered the Holocaust to be “the second original sin.” She said: “Karski’s courage taught the world what it means to be a human being.”

The 50th floor of the spectacular Baker & McKenzie law offices in Chicago served as the setting for the foundation launch, attended by about 125 people from around the world. Baker & McKenzie serves as the pro-bono legal counsel for the foundation, which has branches in Chicago and Warsaw. Serving on the board of directors are: Andrzej Rojek; Przemysław Krych; Michal Mrozek; Bozena Nowicka McLees; Wanda Urbanska; and Ewa Wierzynska.

Photos shown below include, left to right: A welcome from Baker & McKenzie in three languages; the Foundation's Board of Directors with the Governor (Ms. Wierzynska not in the photo); Purdue University students with the Governor.