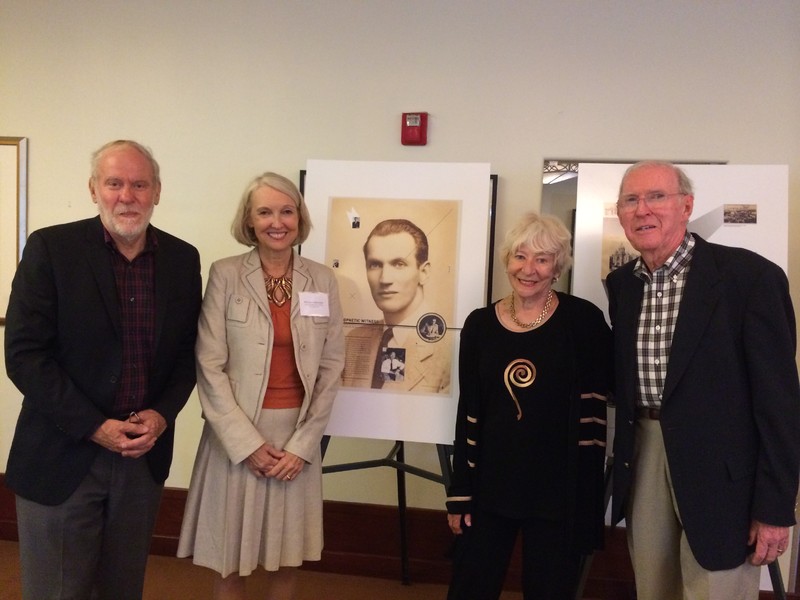 On September 26 and 27, 2014, The European Union Center of California hosted a lively international conference on the occasion of the Jan Karski centennial, called "Exploring the Concept and Application of the Responsibility to Protect (R2P)." Held in an elegant, light-filled room on the campus of Scripps College, the conference sessions were flanked by the exhibition, The World Knew: Jan Karski's Mission for Humanity, consisting of 22 panels on easels.

David M. Andrews, director of the European Union Center of California and conference host, welcomed participants on Friday night invoking the name of Jan Karski and laying out three approaches to R2P that would be explored the following day: the obligationist perspective; the conditionalist approach; and the skeptical position.

The opening panel focused on the legacy of Jan Karski and was kicked off by Mariusz Brymora, Consul General of the Republic of Poland in Los Angeles, who introduced Karski as "a brave hero who alerted the British and Americans about the on-going Holocaust in occupied Poland." Karski was a representative of the Polish Underground, Brymora added, whose extreme bravery "was overshadowed by the original failure of his mission." Wendy Lower, Director of the Center for Human Rights Leadership at Claremont McKenna College and author of Hitler's Furies: German Women in the Nazi Killing Fields (a finalist for the 2013 National Book Award), then took the floor. Citing United Nations' Ambassador Samantha Power's classic book on genocide, A Problem from Hell: America in the Age of Genocide, Lower described Karski as a "screamer" alerting the world about a crime so heinous that it choose not to intervene.

Wanda Urbanska, President of the Jan Karski Educational Foundation, and Agnieszka Bienczyk-Missala, assistant professor at the Institute of International Relations, University of Warsaw followed. Using a Power Point presentation, Ms. Urbanska gave an overview of Karski's life and times and the work of the foundation, while Ms. Bienczyk-Missala presented a paper about her "personal hero," Rafal Lemkin, the Polish-Jewish visionary who coined the term "genocide" and vigorously lobbied the United Nations to address the issue in the 1940s in the immediate aftermath of World War II.

The following day's panels spawned a lively debate about the practical application of the R2P protocol. Philippe Bolopian, United Nations Director of Human Rights Watch, spoke eloquently and persuasively throughout the conference maintaining that R2P is "not a legal obligation but a moral one." He said that "Rwanda and Bosnia should not have happened." Seyom Brown, Adjunct Senior Fellow at the American Security Project, Washington DC, presented the "conditionalist approach," while Alan Kuperman, associate professor, University of Texas Austin, assumed the contrarian position saying that it is "not our responsibility to protect" individuals in foreign countries and asserting that Machiavelli "has gotten a bad rap."

Former Karski students Jim and Toni Sheldon, Georgetown Class of 1962, participated in a panel discussion after the Friday night session describing their elegant former professor as passionate, magnetic and theatrical.

As the conference wound down, Consul Brymora vigorously refuted a statement that the Russian takeover of Crimea and incursion into eastern Ukraine were positive exercises of the R2P protocol. "I wasn't planning to speak at this session," he said. "But I must vigorously object on behalf of the government of the Republic of Poland. Russia's actions in Crimea and Ukraine are a perversion of R2P." Upon the conclusion of the conference, Consul Brymora said that he wanted to be sure that the students who attended the conference did not leave "with the impression that President Putin's actions were justified as an act of protection of people."

The conference was co-sponsored by the Jan Karski Educational Foundation and the Consulate General of Poland in Los Angeles.