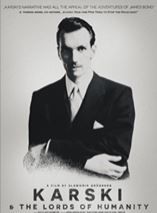 The American premiere of the documentary "Karski and The Lords of Humanity" was held on November 5 at Georgetown University’s Lohrfink Auditorium, with several hundred people getting their first glimpse of the new film at the University where Karski spent 40 years of his life.

The discussion centered around the participants’ impressions of Karski, including how they first met him. Lieber indicated that “Karski was a hero, the real thing” while Ambassador Schnepf talked about feeling privileged as a fellow diplomat to learn what Karski did during his life. The Ambassador met Karski as a graduate student in Warsaw and was surprised that he had heard nothing of Karski’s legacy before then. He said that “Jan Karski was a hero but at the same time human. He did not understand the silence of the world.”

Ambassador Mull was a student of Karski’s, and Karski was the first Pole he ever met. He described Karski as striding into class and having a passionate style of speaking that he had never seen at Georgetown. He mentioned that he made a point of attending every lecture of Karski’s class.

Father McManus fascinated the audience with a story about a former Archbishop of Washington who, while visiting the Auschwitz Museum, put his hands into ashes, causing him to hear voices and see images of people, presumably those who had perished there. After conferring with Pope John Paul II, he was told that this vision was a gift and that he had to do something to prevent another Auschwitz from happening again. So the Archbishop enlisted Fr. McManus into an initiative about Jewish-Catholic dialog at Georgetown, leading to his interaction with Karski.

Then the documentary began.

Combining historical photography and film footage of Karski with animation, the film portrayed Karski and his times in a powerful but thoughtful way. Footage from Karski’s “Shoah” appearance revealed to the audience Karski’s emotion over events that he had witnessed decades before. Then the voice of his American biographer Tom Woods narrated, followed by British historian Martin Gilbert, who provided context into Churchill’s perspective. Zbigniew Brzezinski spoke about his reaction to meeting Karski as a child.

Even though Karski had felt that his actions had little impact, it was pointed out that the War Refugee Board was established after his meetings with Western officials, resulting in the saving of about 200,000 Hungarian and Romanian Jews.

The film’s title apparently alludes to how Karski referred to Roosevelt, as a “Lord of Humanity” who had power over millions of people. The irony is obvious in using this term when applied to FDR, Anthony Eden, Pope Pius XX and all the others who turned their backs on the plight of the Poles and the Jews.

This outstanding film was directed by Sławomir Grünberg, produced by Dariusz Jablonski, and the screenplay was written by Katka Reszke, all of whom spoke after the showing. The process of completing this film was described by Reszke as “both challenging and transformative.” Jablonski indicated that “[Karski’s] job is not finished but with this film, thousands more will learn” about his legacy.

And in fact, two additional documentaries are planned using footage shot during the seven years that the film was in production. "Karski and The Lords of Humanity" has been submitted for an Academy Award for a documentary feature.