Chicago Remembers Jan Karski on the 20th Anniversary of His Death 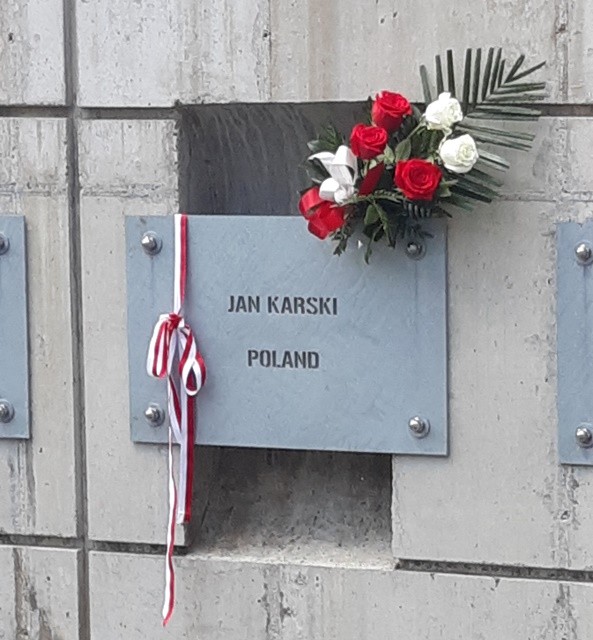 A plaque dedicated to Jan Karski at the Ferro Fountain of the Righteous, at the Holocaust Museum and Education Center in Skokie, IL (Photo: Marek Adamczyk)

Chicago, IL – The “Windy City,” which Jan Karski visited several times during his life in the U.S., has many commemorative sites recognizing his mission and legacy. Naturally, on the 20th anniversary of this great Pole’s death, the Polish-American community made the most of these places to pay him due respect.

On July 12, 2020, the Illinois Holocaust Museum and Education Center in Skokie, IL, located just outside of Chicago, hosted a commemorative ceremony with the laying of white-and-red flowers at the plaque commemorating the Polish emissary, placed in front of the building. The following officials took part in the observance: Helena Sołtys, Bernadetta Manturo, and Marek Adamczyk, all coordinators from the Historical Point, a Chicago chapter of Poland’s Institute of National Remembrance; Tadeusz Młynek, President of the Polish Teachers Association in America; and Bożena Nowicka McLees, Professor at Loyola University, Chicago, also representing the Education Commission of the Polish American Congress.

Honoring this noble and righteous man in a place that tells a story about horrible human suffering has a special and symbolic significance. During their remarks, the officials remembered Karski’s efforts to stop the Holocaust of the European Jews and reconcile Poles and Jews. They also stressed Professor Karski’s contribution to embracing human rights in international law.

Next, the celebrations moved to Milwaukee Street in Chicago. One part of the street was named “Jan Karski Way” after the Polish hero, at the initiative of Bożena Nowicka McLees, a former member of the Jan Karski Educational Foundation Board. The popular Copernicus Center in the vicinity ensures that young members of the Polish community have a good chance of getting acquainted with the Karski legacy and values.

It is worth noting that a Polish supplementary school in Palos Heights, near Chicago, bears Jan Karski’s name. Its goal is to instill in its students the moral principles that guided Karski throughout his life. Two years ago, to honor their hero, its representatives planted an oak tree “Jan” at the Oak Independence Alley.

The anniversary poses a challenge for us never to stop doing good and fighting intolerance, racism, and antisemitism. Our world still needs new Karskis.

Related pictures: Chicago Remembers Jan Karski on the 20th Anniversary of His Death