2013 Spirit of Jan Karski Award Given to Samantha Power 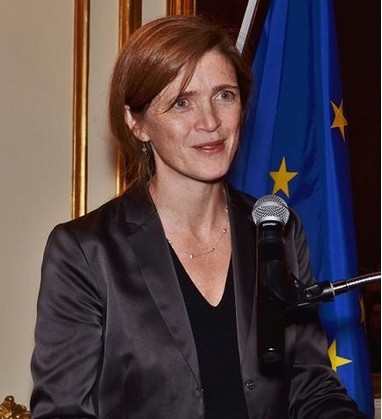 Ambassador Samantha Power, US Permanent Representative to the United Nations, was honored at the first anniversary celebration of the Jan Karski Educational Foundation at the Consulate General of the Republic of Poland in New York with the Spirit of Jan Karski Award for her exemplary work in advancing the issue of genocide prevention.

Foundation President Wanda Urbanska, who served as master of ceremonies, read an excerpt from the letter from the Ambassador of the Republic of Poland to the US, Ryszard Schnepf. He congratulated Ambassador Power for her actions to combat genocide around the world while lending his support to the foundation.

During his unscripted, eloquent presentation, David Harris brandished an autographed first edition of Jan Karski's Story of a Secret State and a report from the Polish government-in-exile addressed to the Allies on December 10, 1942, regarding the mass extermination of the Jews in German-occupied Poland – two of his most cherished possessions.

“To appear in the same encyclopedia as Jan Karski, never mind the same chapter, paragraph, sentence, is incredibly humbling,” said Ambassador Samantha Power during her powerful acceptance speech. She said that Karski was a hero, whose legacy will be sustained. She also invoked Rafał Lemkin, a Polish lawyer of Jewish heritage and the creator of the term “genocide”. Lemkin, who lost dozens of relatives to the Holocaust, advocated for the first-ever human rights treaty.

“Wanda, you did an unbelievable job with some Karski karma of your own—‘if you build it, they will come’” said Ambassador Power. “I will say if you hadn’t invited me to this reception, I would probably have crashed it just to explore the premises and to engage with all of you, particularly around the creation of this educational foundation that bears the name of Jan Karski.”

A stirring piano recital by a Polish-Canadian pianist Katarzyna Musiał, followed the award ceremony. Then, the guests had an opportunity to savor authentic Polish cuisine and participate in a Silent Auction of works of Polish and Jewish artists, such as Janusz Kapusta, Rafał Olbinski, and Ryszard Horowitz. All proceeds from the silent auction will benefit the Jan Karski Educational Foundation.

Click the link below to read Ambassador Samantha Power’s speech in its entirety.