Jan Karski: A Lighthouse in a Storm 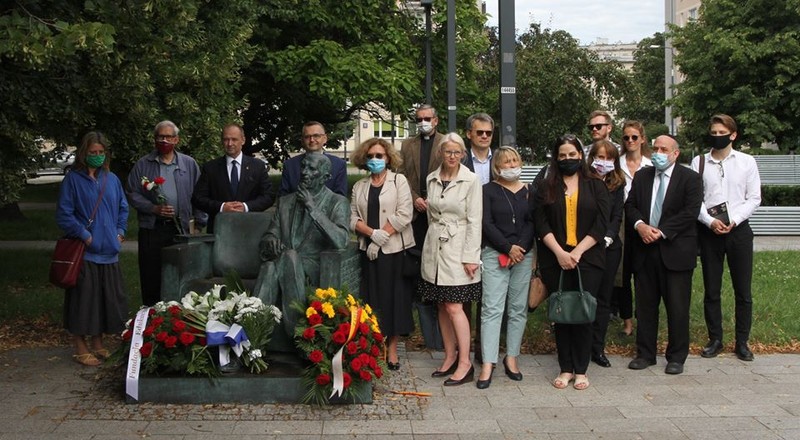 Guests of the anniversary ceremony at the POLIN Museum (Photo: Tomasz Komornicki)

Warsaw, Poland – The 20th anniversary of Jan Karski’s death was commemorated in Warsaw, Poland, on July 11-12, 2020, with several events honoring the emissary of the Polish Underground.

On Saturday, July 11, the Chief Rabbi of Poland Michael Schudrich presided over a special prayer for Jan Karski at the Nożyk Synagogue.

Many officials, including Mayor of the Śródmieście District of Warsaw, Aleksander Ferens, and the Deputy Ambassador of Israel to Poland, Tal Ben-Ari Yaalon gathered at the Karski Bench at the POLIN Museum of the History of the Polish Jews on Sunday, July 12, to lay flowers and remember the hero of WWII and his mission. Mayor Ferens pointed out that, despite the tragic experience of the Holocaust, genocide did happen again after WWII, and reminded about the 25th anniversary of the of Srebnica massacre, where reportedly more than 8,000 Bosniaks—mainly men and boys—were killed during the Bosnian War. Rev. Grzegorz Michalczyk from the Institute for the Culture of Encounter and Dialogue, Rabbi Michael Schudrich, and Ewa Junczyk-Ziomecka, President of Fundacja Edukacyjna Jana Karskiego (the Jan Karski Educational Foundation’s sister organization) were also present. During the ceremony, Ms. Junczyk-Ziomecka read a letter from the American Embassy in Warsaw (see below).

On the same day, Fr. Michalczyk, presided over a special Mass, offered for the intention of Jan Karski, at the St Andrew the Apostle and Albert Chmielowski Church in Warsaw. He made an appealing parallel between the Gospel reading and the story of the Polish emissary. Karski’s efforts to spread the word about the Holocaust were just like those of the sower from the parable, who sows the seeds with mixed results. Some fall on the road or among rocks or thorns and die, while only some of them fall on the fertile soil and produce fruit. Karski’s words fell on death ears as if in Isaiah’s prophecy: “You shall indeed hear but not understand, you shall indeed look but never see.” (Matthew 13:1-23)

A commemorative event followed the Mass. In her opening remarks, Ewa Junczyk-Ziomecka stressed that the Karski legacy puts responsibility not only on political leaders, lawyers, and members of the diplomatic core but on all of us to never stay indifferent when other people are suffering. Michał Mrożek, a member of the Jan Karski Educational Foundation Board, paid tribute to his former teacher at Georgetown University in a powerful address. He reflected on the Karski’s strong Catholic faith, which as the Polish emissary himself said, commanded him to speak the truth. Mr. Mrożek recalled Karski’s famous 1981 speech about the Holocaust, in which he said, “My faith tells me that the second original sin has been committed by humanity: through commission or omission or self-imposed ignorance or insensitivity, or hypocrisy, or heartless rationalization.” Mr. Mrożek compared Jan Karski to a "lighthouse in a severe storm." For him, Karski was always an essential guide and a map for how to navigate his life, and he hopes it will be so for other young people who are in search of role models. “In today’s world, where so many things are relative, where the good and the evil, and the true and the right are being questioned, Professor Karski’s lectures are needed once again,” said Mr. Mrożek. (See the speech in its entirety below.)

The evening also included a classical music performance by Emanuel Bączkowski, on the organ, and Maciej Przestrzelski, violin, a presentation of a slide show based on the Karski Photobiography, and a reading from Karski’s Story of a Secret State.

Jan Karski was a member of the Polish Underground during WWII, the first eyewitness to widely report on the slaughter of the Jews in his homeland to the western political leaders, as well as members of international organizations and media. Many people did not believe his testimony even though it was grounded in his brave, in-person undertaking to infiltrate the Warsaw ghetto and a transit camp in Izbica Lubelska and witness the horrors. After the war, he became a respected professor at Georgetown University, and for his courageous efforts was awarded the highest Polish honors, as well as the US Presidential Medal of Freedom and the Righteous Among the Nations medal. He is now considered a symbol of righteous conduct when other human beings face atrocities and injustice. Jan Karski died at the age of 86 on July 13, 2000, in Washington, DC.

The celebratory events were organized by Fundacja Edukacyjna Jana Karskiego and the Head Office of the Śródmieście District of Warsaw.

Related pictures: Jan Karski: A Lighthouse in a Storm