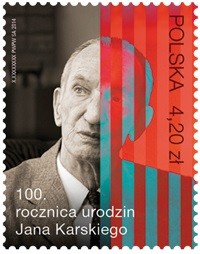 In addition to the April 24 commemoration at Georgetown University in Washington (including the embassy reception , the moving breakfast, the panel and dramatic reading), groups around the world hosted major celebrations for Jan Karski’s 100th birthday.

Karski’s birthplace of Lodz, Poland hosted over 20 events devoted to Karski. One major event was a ceremony of presenting the new coins depicting Jan Karski and his life, issued by the National Bank of Poland, Polish President Bronislaw Komorowski was the keynote speaker. Jan Karski Educational Foundation Board member Ewa Wierzyńska consulted with National Bank of Poland on the project. Margaret Zaleska of the Bank was also present. A series of beautifully designed collector coins devoted to Jan Karski in denominations of 2, 10 and 200 złotys were presented, and there was a symbolic exchange of the coins.

The Museum of the City of Lodz, to which Karski donated most of his personal memorabilia, unveiled a replica of Jan Karski’s office. A commemorative plaque was placed on the building of the former Gymnasium (high school) that Karski attended. A walk was held in Karski’s footsteps, to show the key locations connected with Karski’s youth.

Several movies, stage shows and exhibitions devoted to Karski were presented. Additionally, there was a discussion about the new edition of Karski’s Tajne panstwo (the Polish edition of Story of a Secret State).

These events were organized by the Museum of the City of Lodz and the Mark Edelman Center for Dialogue.

Many events made up the April 24 celebrations in Warsaw, which were organized through the “Jan Karski, Unfinished Mission” program at the Polish History Museum (PHM) in partnership with Fundacja Edukacyjna Jana Karskiego.  There was a trip on a historic Warsaw tram, involving a game of chess, Karski’s favorite hobby, which he played until the very end of his life.

Former Ambassador of Israel to Poland Szewach Weiss held a meeting, along with a discussion with journalist Bogdan Rymanowski entitled “Why Did the West Keep Silent?” about Karski’s effort to inform the West about atrocities in the German Nazi-occupied Poland.

A multi-media show about Karski created by the Polish History Museum was presented at the Polish Academy of Sciences, at which the entire facade of the Staszic Palace was taken up with Karski’s picture. The exhibition "Jan Karski. Man of Freedom” also created by the PHM, was opened at the Central Railway station.

The Jan Karski International Institute for Dialogue and Tolerance in Ruda Slaska organized a conference on the topic of "The legacy of human courage and righteousness." During the event, a Representatives of Poczta Polska (Polish Postal Services) showed a specially designed postage stamp with the image of Jan Karski. Former Polish President Aleksander Kwasniewski participated in the ceremony.

Additionally, an academic panel examined Karski’s time and significance. Four scholars and historians spoke about varied topics and the discussion was moderated by Keely Stauter-Halsted, Professor of History, Hejna Chair in Polish History, University of Illinois at Chicago.

Michael H. Traison spoke about “Poland in the heart of Jews and Jews in the heart of Poland -- a Civilization Jan Karski Hoped to Save." Neal Pease, Professor of History, University of Wisconsin, Milwaukee, presented a talk on "Jan Karski & the Polish Government-in-Exile, the Polish Home Army & Jewish Questions during WWII." Allan Reich of the American Jewish Committee spoke about "Jan Karski's broader legacy for humanity." Last, historian and President of the Piast Institute Thaddeus Radzilowski addressed the topic: "Jan Karski -- The Messenger.

Video recordings of the Chicago consulate event and the panel were generously underwritten by Bozena Nowicka McLees, a member of the board of directors of the Jan Karski Educational Foundation.  The Consulate’s story is also available.