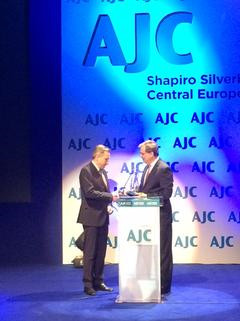 Warsaw – David Harris, CEO of the American Jewish Committee (AJC) and member of the Jan Karski Educational Foundation’s Advisory Board, presented the AJC’s Jan Karski Award to Andrzej Folwarczny, Founder and President of the Forum for Dialogue on March 28, during a gala which celebrated the opening of a new AJC office in Warsaw.

“Andrzej captures the spirit of Jan Karski, a true hero of humanity,” said Harris. “Thanks to Andrzej’s vision to bridge the abyss between Poland and Israel, between Poland and Jews, many have come to understand each other better. Together, they are determined to become authors of history, not its prisoners. Andrzej is an author.”

In his acceptance speech, Mr. Folwarczny described Jan Karski as a role model and expressed his deep appreciation for being honored with this prestigious award.

On the occasion of the event, the President of the Republic of Poland, Andrzej Duda issued a special statement, read at the ceremony, in which he praised AJC for its role over the years in advancing the transatlantic partnership.

According to AJC’s official website, AJC is the leading global Jewish advocacy organization, which – with offices across the United States and around the globe, and partnerships with Jewish communities worldwide – works to enhance the well-being of the Jewish people and to advance human rights and democratic values for all. Its ties with Poland have been strong and go back to the 80’s when AJC was very supportive of the Solidarity movement and its leadership in making democratic changes in Poland. In 1997, it backed Poland’s efforts to join NATO. It also supported the Polish government’s 2016 request to UNESCO to rename the concentration camp in Auschwitz to "Auschwitz-Birkenau: Nazi Germany concentration and death camp.”

AJC has also been an avid advocate of the Karski legacy and actively participated in the Jan Karski US Centennial Campaign, thanks to which Jan Karski was posthumously awarded the Presidential Medal of Freedom in 2012. The Jan Karski Award is given to those who fight anti-Semitism and encourage interfaith and intercultural dialogue. AJC and the Forum for Dialogue started their partnership in 1995 and since then have been collaborating on the promotion of the understanding and cooperation between Poles and the American Jewish community. David Harris received the Commander’s Cross of Polonia Restituta from the Polish president in 2005 for his outstanding achievements in advancing Polish-Jewish relations.

The gala, which took place at the POLIN Museum of the History of Polish Jews in Warsaw, was attended by many notables including Dr. Vaira Vīķe-Freiberga, former President of Latvia, who delivered the keynote address; U.S. Ambassador to Poland Paul Jones, Israeli Ambassador to Poland Anna Azari; Rabbi Michael Shudrich, Chief Rabbi of Poland, who delivered the opening invocation; Archbishop Stanislaw Gadecki, President of the Polish Episcopal Conference, who delivered the closing benediction; and Ewa Junczyk-Ziomecka, President of Fundacja Edukacyjna Jana Karskiego (Jan Karski Educational Foundation’s sister organization); as well as members of the Jan Karski Educational Foundation Board of Directors and Advisory Board.