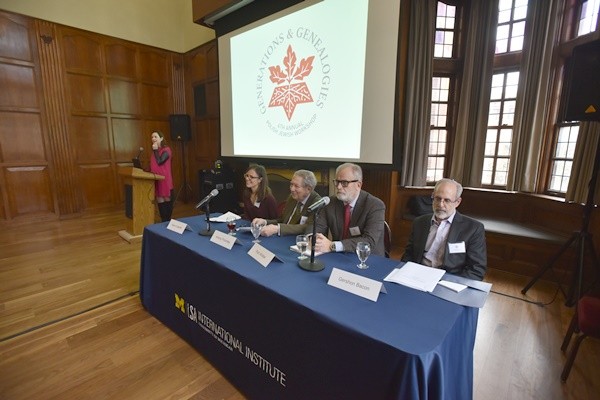 Genvieve Zubrzycki, an Associate Professor of Sociology at the University of Michigan, Director of the Weiser Center for Europe & Eurasia, and organizer of the 4th Polish Jewis Studies Workshop delivering the opening remarks (Photo: Peter Smith)

Ann Arbor – The 4th annual Polish Jewish Studies Workshop took place on April 2-4 at the University of Michigan Ann Arbor. The conference gathered distinguished and aspiring scholars in the field of the humanities and social sciences from top universities in America, Poland, Canada, and Israel, who presented their papers on recent advances in research and teaching at the crossroads of the Polish and Jewish studies. Particularly visible was the presence of a great number of young scholars from Poland.

The conference, whose main theme was “Generations and Genealogies,” was opened by Genvieve Zubrzycki, an Associate Professor of Sociology at the University of Michigan, Director of the Weiser Center for Europe & Eurasia, and organizer of the event, who welcomed all participants and acknowledged all sponsors as well as those who helped organize the conference.

Antony Polonsky of Brandeis University (Waltham, MA) and chief historian at the POLIN Museum of the History of Polish Jews in Warsaw, commenced the opening panel to talk about the developments in Polish Jewish studies and the progress made in the last few decades. He called for objectivity in pursuing these sensitive and sometimes controversial subjects, for dialogue and collaboration between opposing – whether political or ideological – views, to reach consensus that would be agreeable to most. Gershon Bason of the Bar-Ilan University (Ramat Gan, Israel) talked about the factors that influenced Polish Jewish studies and stressed that it is important to look at the Holocaust through the context of social, political, and economical mechanisms of the preceding period, but also to bear in mind that the Holocaust is not and should not be the only focus of the studies. He discussed potential topics for future research in the field.

Other sessions on day one of the workshop covered a wide variety of topics, such as the challenges that the first generation of Polish Ashkenazi Jews faced while communicating with authorities and non-Jews, and how this became a divisive phenomenon with local communities; the integration of the Jews into the Polish elite before WWII and a discussion of fear as a determining factor; examination of suicides in the Łódź ghetto; attitude of the Jews who survived the war towards the Communist reality in Poland; problems encountered by the Jews who moved to Sweden after their inability to assimilate in the South-west Silesia, where they were resettled after the Yalta agreement; and the evolving presentation of the history of Jews at Polish history museums.

The second day of the conference presented equally stimulating issues, including comparative analysis of the Poles’ perception of the fate of the Polish Jews during WWII; the transforming narrative about the Righteous in Poland; “competitive martyrdom” in relation to the Warsaw Ghetto Uprising and the Warsaw Uprising of 1944; memory and the truth behind wartime memoirs; challenges that translators face while working with Holocaust-related literature; and an account of how a picture of a Jew with a golden coin has found its place in the contemporary Polish culture. The closing panel was entirely devoted to the discovering of Jewish identity and the Jewish revival in Poland.

The conference was accompanied by two additional presentations: a reading and conversation with Agata Tuszyńska, Polish writer and award-winning journalist, author of Family History of Fear: A Memoir, which deals with the writer’s own experience of uncovering her Jewish heritage, and a lecture by Adam Michnik, a historian, member of the Communist opposition, a key participant in the “Round Table Talks” that contributed to the collapse of the Communist regime in Poland, and Editor-in-Chief of Poland’s leading newspaper Gazeta Wyborcza. Mr. Michnik talked about his experiences in Communist Poland, including the infamous anti-Jewish campaign of 1968.

All sessions were followed by lively, constructive, and inspiring discussion with the audience.

The 4th Polish Jewish Studies Workshop was organized by the University of Michigan Copernicus Program in Polish Studies in collaboration with the Adam Mickiewicz Institute. The Jan Karski Educational Foundation was one of the lead sponsors of the event. Please see the full list of sponsors here.