“His Words Fell on Deaf Ears.” 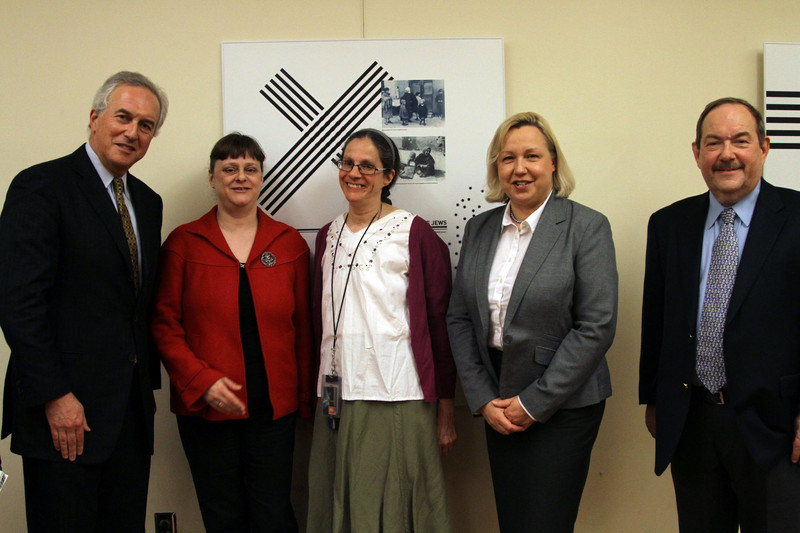 New York – On Tuesday, March 10, 2015 the Brooklyn College Library of the City University of New York hosted a reception in honor of the exhibit The World Knew: Jan Karski’s Mission for Humanity. Among the honored guests were the Polish Consul General Madam Urszula Gacek and Andrzej Rojek, Chairman of the Board of Directors of the Jan Karski Educational Foundation.  Others included Rhoda Jacobs, a former member of the New York State Assembly, Nadya Drukker, the Executive Director of Tanger Hillel at Brooklyn College, Inna Stavitsky, Chairman of the Brooklyn-based Holocaust Memorial Committee, and Micha Tomkiewicz, a Brooklyn College physics professor and survivor of the Warsaw Ghetto.

Close to fifty people attended the event, including Brooklyn College students, faculty and administrators and invited visitors from the greater Brooklyn community.  Those attending had an opportunity to view the 22 vivid panels of the exhibit recounting the heroic life of Jan Karski and view video excerpts of Claude Lanzmann’s interviews of Karski for his film Shoah.

Guests were able to mingle and talk while they enjoyed a dessert buffet including kosher pastries from Ostrovitisky’s bakery (a stop on Mayor Giuliani’s tour of the neighborhood several years ago) and chocolates from Slodycze Wedel, a Polish candy store in Greenpoint, Brooklyn, noted in The New York Times for its “encyclopedic collection of wrapped and tinned confections.”

The Chief Librarian and Executive Director of Academic Information Technology, Professor Stephanie Walker, introduced the distinguished guests.  Consul Gacek spoke, noting that her New York City Consulate office stands on Madison Avenue and East 37th Street on Jan Karski Corner.  She urged all to see the model Karski provides for our world today by speaking out against genocide.  “The tragedy of Karski,” she said, “was not that he failed to act but that his words fell on deaf ears.”

Andrzej Rojek opened his remarks with a reference to Samantha Powers’ recent speech to the America Israel Public Affairs Committee Policy Conference. Powers’ had read word-for-word the cable Ignacy Schwarzbart, a Jewish representative of Poland’s government-in-exile, had sent to the World Jewish Congress in New York following his 1942 meeting with Jan Karski.  The chilling passage describes with an economy of words, punctuated by the perfunctory “STOP” of telegrams, the horrors of the deportation and extermination Poland’s Jews.  The Brooklyn College audience was riveted as Chairman Rojek repeated the words from this historical document.  No less attention was paid when Professor Robert Shapiro of the Brooklyn College Judaic Studies Department spoke his tribute to Jan Karski, reminding all present that the Lodz of Karski’s youth (and the subject of Dr. Shapiro’s doctoral dissertation) was a multi-cultural city where Karski’s Catholic family lived side-by-side with their Jewish neighbors.

Professor Beth Evans wrapped up the speeches with a recommendation of the importance of the Karski exhibit for all students, whether they are studying history, political science, philosophy, Africana studies, or Puerto Rican and Latino studies (all majors at Brooklyn College).  Learning to stand up for what is morally right in the face of injustice is the most important lesson any college can teach.  Jan Karski provides Brooklyn College students of diverse socio-economic backgrounds with an outstanding model for such righteous behavior.

The article was written by Beth Evans, Associate Professor at the Brooklyn College Library, who has been leading the initiative of bringing the Karski exhibit to Brooklyn College.