Are You Going to be the Victim or the Perpetrator? – The Lessons of Karski 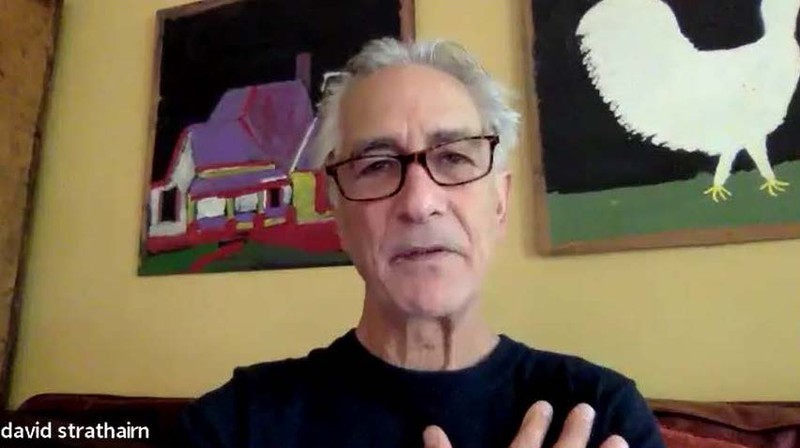 Academy Award-nominated actor David Strathairn, who portrays Jan Karski in the movie Remember This, talks about his artistic journey with the Polish emissary

Polish and international students enrolled in Humanitarian Action courses at the University of Warsaw had a once-in-a-lifetime opportunity to interact with the creative team of the movie about Karski, Remember This, during a webinar organized by Fundacja Edukacyjna Jana Karskiego and the Department of Political Science and International Studies at the University of Warsaw, with the support of Jan Karski Educational Foundation.

The conversation followed a special presentation of the movie at the University of Warsaw, which took place on May 16, 2022. The guests included: David Strathairn, Academy Award-nominated actor (Good Night, and Good Luck, Lincoln, Nomadland), who portrays Karski; Derek Goldman, co-writer and co-director; Clark Young, co-writer; Eva Anisko, producer, recipient of an Emmy Award for her documentary work; and Ewa Junczyk-Ziomecka, President of Fundacja Edukacyjna Jana Karskiego. The discussion was moderated by Prof. Agnieszka Bieńczyk-Missala, a professor at the Department of Political Science and International Studies and a recipient of the Jan Karski Educational Foundation scholarship to participate in the Georgetown Leadership Seminar, which she described as a pivotal experience in her understanding of the Karski legacy.

During the introductory exchange, David Strathairn talked about his first and what turned out to be a life-changing screen encounter with Karski, watching his emotional testimony in the documentary Shoah. The interview, in which Karski breaks down, at first unable to recall his harrowing experience in the Warsaw Ghetto, was one of the numerous prompts – in addition to other TV interviews, speeches, and testimonies of people who knew Karski – that he later used while preparing for the role of the Polish emissary and which helped him build the character.

When talking about the original one-man theatrical production, Remember This: The Lesson of Jan Karski, on which the movie is based, Strathairn talked about the exhaustion he feels every time he presents the play to a live audience, but also how energized and inspired he is by Karski, his story, and character. “I am overwhelmed,” said Strathairn. “Man of great integrity, sense of humor, but at the same time of enormous faith and strength to do what he did. And at Georgetown University, he put his personal pain and trauma aside and inspired his students to carry on his legacy.” Derek Goldman and Eva Anisko expressed the importance of the message that both the play and the movie carry – to show how Karski’s story is important historically but also to today’s ever-changing world.

Prof. Bieńczyk-Missala then invited the participating students to ask questions. The most inspiring was by Julia Kowalska to David Strathairn: “When you play both the victim and the perpetrator, did you feel like any of us could become either of them?” In response, the actor quoted a line from the script: “Each individual has an infinite capacity to do good, and infinite capacity to do evil. We have a choice.” He added that these are the questions the creators wanted to ask the audience, “Which side will you take? Will you follow your beliefs, or will you be compromised?”

Another thought-provoking question came from Michał Kowalczyk, who inquired about the statement given by Karski in the movie that it is not the governments but individuals with good hearts that make a difference. “There are good people in government,” said Strathairn but added that governments sometimes lose sight of humanity. Alicia Mankel asked the actor how he deals with Karski’s helplessness. Strathairn admitted that Karski’s conviction of his failure is a heavy emotional burden to carry, and it is something he constantly struggles with. However, the response from the audience, especially young people, gives him a force to move forward.

Ewa Junczyk-Ziomecka instigated a discussion about the role of faith in Karski’s life. Clark Young noted the complexity of Karski’s declaration, “I am a Christian Jew,” which Karski said at a 1981 conference organized by Nobel Prize laureate Elie Wiesel. David Strathairn commented on the statement Karski made late in his life that God gave man free will, and it’s up to man to make his choices.

Derek Goldman talked about why he decided to offer the role to Strathairn. Once he was approached by a Georgetown University official to create a play about Karski to commemorate his 100th birth anniversary, he had a gut feeling about the actor. “David has this extraordinary humility, ego-lessness, grace, and dignity that felt Karski-like,” he said. He also talked about plans to bring the movie to a wider audience and expand the Georgetown University course “Bearing Witness: The Legacy of Jan Karski Today” – during which students are inspired to apply the Karski legacy to current political, social, and humanitarian problems – to other colleges and schools around the world.

The play Remember This: The Lesson of Jan Karski, co-written by Clark Young and Derek Goldman and directed by Derek Goldman, was created by The Laboratory for Global Performance and Politics at Georgetown University. The movie, Remember This was co-directed by Jeff Hutchens (also Director of Photography) and Derek Goldman and produced by Eva Anisko. Both productions and their distribution have been realized with the support of the Jan Karski Educational Foundation.

Read our report from the special movie presentation on May 16, 2022, here.