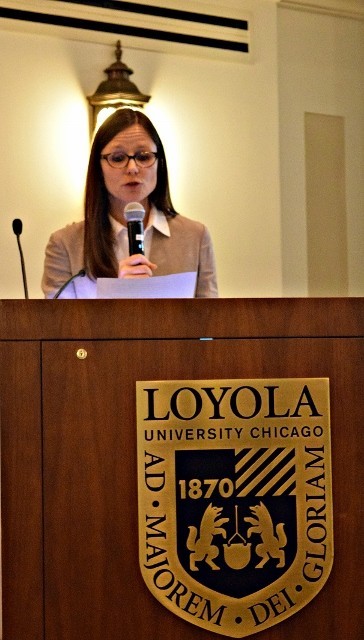 Karen Underhill, Assistant Professor at the Dept. of Slavic & Baltic Languages & Literatures at the University of Illinois at Chicago welcomes the participants of the Third Polish Jewish Studies Workshop (Photo: Agnieszka Jeżyk)

“Doikeyt, Diaspora, Borderlands: Imagining Polish Jewish Territories” was the subject of the Third International Polish Jewish Studies Workshop (PJSW), organized by the University of Illinois  at Chicago on April 10-12. It gathered many distinguished scholars from around the U.S., Poland and Israel, who presented their recent papers on the subject.

Karen Underhill of the University of Illinois at Chicago’s Dept. of Slavic & Baltic Languages & Literatures, who was the main organizer of the PJSW, kicked off the conference on April 10 with an opening event, hosted at the Loyola University downtown campus by Bozena Nowicka McLees, Director of the Interdisciplinary Program in Polish Studies at Loyola University Chicago. It was attended by Consul Konrad Zieliński of the Consulate General of the Republic of Poland in Chicago, Rev. John Pawlikowski of the Catholic Theological Union, and philanthropist and Holocaust survivor Sigmund Rolat, among others. Her welcoming remarks were followed by a book reading and discussion with the renowned Polish writer Olga Tokarczuk, whose latest novel The Books of Jacob has won her a second Nike Award, the most prestigious literary honor in Poland. Tokarczuk read excerpts from her book, which brings to life the historical figure of Jacob Frank – an 18th century Polish-Jewish religious leader, who claimed to be the reincarnation of the self-proclaimed messiah Sabbatai Zevi and of the biblical patriarch Jacob. During the discussion, Olga Tokarczuk talked about her extensive research for the over 900-page novel, which involved a great deal of reading and travelling, and about her efforts to find a balance between being true to history and creating an imaginary world. The moderator, Michał Paweł Markowski of the University of Illinois at Chicago, remarked that the book deals with the ethnically, linguistically and religiously pluralistic nature of Poland’s culture, and noted that it marks an important transition in the author’s writing from an individual to a collective experience.

April 11 and 12 encompassed two full days of panels, which presented a vast array of topics, such new methodological approaches that have allowed scholars to map and understand  the historical expansion of Hasidic Jewish communities in Eastern Europe, and the challenges of categorizing the national identity of Polish Jews due to  Poland’s constantly changing physical borders (Marcin Wodziński/University of Wrocław); postcolonial approaches within in Polish-Jewish scholarship (Eugenia Prokop-Janiec/Jagiellonian University); the search for a usable   model for including Yiddish literature within the history of Polish literature (Karolina Szymaniak/University of Wrocław); sites of “non-memory” and non-remembering as  a deliberate action (Roma Sendyka/Jagiellonian University); the history and development  of Polish-Jewish studies (Konrad Matyjaszek/Polish Academy of Science); and others pertaining to “Palestinianism” and Zionism in Interwar Poland, translations of Yiddish literary works into English, and problems of the vocabulary used in discussions of the Holocaust (see link to the full program below.)

The Monday session included a special meeting with Mr. Sigmund Rolat of the North American Council for the Legacy of Polish Jews. Once called a “bridge builder,” Mr. Rolat is a Holocaust survivor, a great philanthropistand businessman. He spoke about his family from the city of Częstochowa, Poland, their ordeal during WWII, and his brother’s contribution to the Jewish partisan resistance movement. He also talked about the revival of Jewish culture in Poland, the POLIN Museum, and his personal commitment to keep knowledge of Jewish life in Częstochowa and in Poland alive for future generations.

Accompanying events organized in connection with the Polish Jewish Studies Workshop included the screening of two documentaries: Karski & The Lords of Humanity (read the report) and Raise the Roof, which tells a story about an extraordinary project to restore the Gwoździec Synagogue roof, now displayed at the POLIN Museum of the History of Polish Jews (more information about the project), as well as the viewing of the exhibition of Polish Jewish avant-garde artists from the Interwar era.