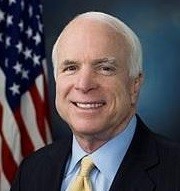 Senator McCain's acceptance speech was captured on a video.