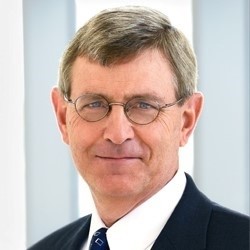 At the time of his retirment in September 2015, Thomas M. Sneeringer was a Counsel at Skadden, Arps, Slate, Meagher & Flom LLP, focusing his practice on international trade policy and related governmental activities. Prior to joining the firm in 2013, he was a senior member and from 2009-2013, head of the Washington, D.C. office of United States Steel Corporation. Previously, Mr. Sneeringer served as senior vice president for public policy and general counsel at the American Iron and Steel Institute.

With extensive legislative experience, Mr. Sneeringer also worked as legislative director for former U.S. Rep. Dan Rostenkowski (D-IL) and legal counsel for the U.S. Department of Health and Human Services. Mr. Sneeringer has served on the board of directors of the Alliance for American Manufacturing and on several committees of the National Association of Manufacturers.

He is a graduate of Georgetown University and a former Karski student. In 2014, on Karski’s 100th birth anniversary, he was honored with the Amicus Poloniae award for his role in obtaining support for the Presidential Medal of Freedom for Karski and his earlier work on behalf of Poland in the office of former Congressman Dan Rostenkowski.