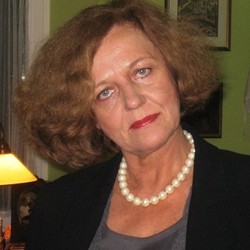 She was previously Secretary of State at the Chancellery of the President of the Republic of Poland, where she was in charge of the Bureau of Social Initiatives and of Polish-Jewish relations. Ms. Junczyk-Ziomecka graduated from the law department and completed post-graduate studies in journalism at the University of Warsaw. After coming to the United States in 1982, Ms. Junczyk-Ziomecka became editor-in-chief of the Dziennik Polski daily in Detroit. In 2001, she was named director of development at the Museum of the History of Polish Jews in Warsaw. She is the first recipient of the Spirit of Jan Karski Award (2012). In 2015, she was awarded the Knight's Cross of the Order of the Rebirth of Poland by President of the Republic of Poland, Bronisław Komorowski for promoting Jewish culture and history as well as for encouraging the improvement of Polish-Jewish relations in Poland and abroad.

Ewa Junczyk-Ziomecka has written and published several books and numerous articles. She has two grown children.